While Goth club nights come and go (mostly go, at the moment), the biggest and most venerable of them all, Slimelight, remains. I’ve only been there a couple of times: I and Cylene intended to make a night of it one year but only the Industrial floor was open and the place was so dead we ended up leaving about midnight. But others would never miss a weekend there. Slimelight is at Electrowerkz in Torrens Street, just round the back of the Angel in Islington, but it hasn’t always been there. A little while ago a friend sent me a link to a film made in 1987 when the club camped out at Holy Trinity Church, Holborn: it was here that it morphed from its former name, the Kit Kat Club (which sounds like something from the 1920s and I'm sure is now a Vintage night somewhere) into Slimelight, as a parody of the mainstream Limelight nightclub which also ran out of a disused church, in Shaftesbury Avenue. The footage has been circulating for some years but I didn’t know about it, nor that Slimelight had had a time using a sacred building (or a former one). 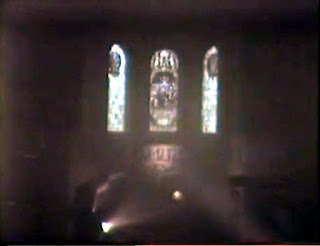 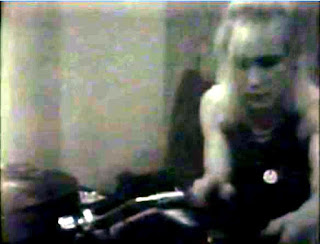 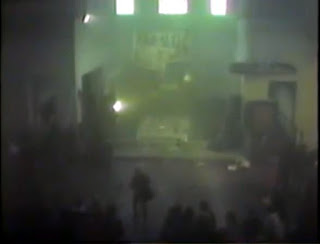 The movie was shot by Mak Ma Yuan, who is still DJing at Slimelight, some thirty years later. Naturally it’s shaky, grainy, and indistinct, but so are people's memories. The club was obviously still an excitingly makeshift affair as Goth pretty much was in those days – look at those turntables – and the music sounds like it's coming from a ghetto blaster in the corner. The patrons have more of a punk look about them than you might expect to find nowadays, with a hint of (intake of breath) New Romantic flash. I imagine nobody official knew they were there: when the film was posted on Facebook someone commented that ‘a few weeks after this there was a pic in a Sunday paper of a very disapproving bishop standing amid a sea of empty vodka bottles and beer cans. Turns out he was the vicar from my primary school’. There’s a moving quality about these pictures of young people from so long ago picking their way around musty pews. ‘The toilets haven’t changed much’ put in one viewer, while another suggested that ‘a church would be such an epic place for a Goth club’.

It would, but then it already is: Ara Nights in Salford is still going, based in Sacred Trinity, which is still actually a church, explaining why Ara has such strict policies about alcohol and musical content. Why would it be ‘epic’ for a Goth night to take place in a church, I wondered? I’ve often mused on the conflicted relationship between Goth sensibility and religion, specifically Christianity. Over the last couple of years I’ve become more aware how damaged people are drawn to the Goth world as a means of dealing with that damage, and places like Slimelight, because they draw individuals from hundreds of miles away to attend, concentrate more of those hurt people in one place. Ultimately you have a choice to make in life between what makes for order, stability and the chance of some sort of fulfilment, and what tends towards disintegration, chaos, and harm; and if you are surrounded by too much damage, you may not climb out. You may even find yourself committed to damage as something positive, because it’s all you’ve got. I don’t think Goth was always like that, certainly not in those early days when the Slimelight folk found their way into Holy Trinity, Holborn; but it has that element to it, and in that sense Goth and Church tend in basically different directions.

Yet most of the time there is a sort of respect there, if not for the Church (and why should anyone respect the Church, after all), then for the sense of something transcendent, something of deep and high significance which affirms that human life is more than the merely everyday and material. In the film, Mak Ma Yuan’s massive VHS recorder (‘like carrying a washing machine about’) pans up and down the three great stained glass windows at the east end of Holy Trinity, standing out against the murk, light in the darkness. Goths instinctively know about holding both together.

Of course most old Goths these days do nothing of the kind, they just stay home with their cats ...
Posted by WeepingCross at 22:13