Christmas Comes But Half the Year

I called into one of the charity shops in the village yesterday. The manager was fuming. 'They've made us put up Christmas stuff', she said. Worse than that, 'The cards are awful. There are only two religious designs. I complain but they say people don't buy religious cards. Well they do in the village. People won't like it.'
Posted by WeepingCross at 08:44 No comments: Links to this post

I and a friend from the LGMG caught the bus from North Greenwich to visit Red House, William Morris's Arthurian fantasy-home in Bexleyheath. On the way we spotted this extraordinary little folly, weirdly marooned next to a roundabout on Blackfen Road. My photograph of it was pretty hopeless, so here's one lifted from Google Earth: 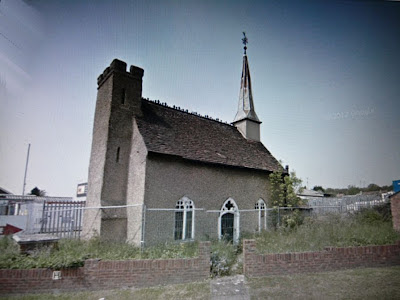 Why, we pondered, take what seemed to be an ordinary small house and fit it with toy Gothic details to make it look like a chapel?

The great Bible of British folly-hunting, by Headley & Meulenkamp, doesn't help us in this instance as the house doesn't get a mention. However Professor Google comes to our rescue. It was once in the grounds of Danson House and was constructed in the 1760s as an eyecatcher or, according to some sources, was an even older building that was adapted for the purpose. An old postcard showing the house was popped onto Flickr some time ago, and here is what one viewer commented, rather movingly:


My grandfather puchased this house sometime in the 1920s and I lived there as a boy during the 1960s - The Powers that Be destroyed the vista of the house when they decided to force us to sell the front garden where the yew tree and well was in order that the new widened road has a "nice wide grass verge" onto the newly built roundabout. The well had a tomb stone (covering it) upon which was engraved lurid threats of what would happen to anyone who drank the water from the well. Notwithstanding the threats of death, there was a pump in the house that took water from the well. The tombstone is still there having been dismantled and re-erected in front of the chapel's battlements - the tombstone's writing (and scull and crossed scythes) is no longer visible. After the roadworks my father decided enough was enough and sold the house and land to the timber merchants next door who used the land and neglected the house. Very very sad and completely incomprehensible as to why the planners took the front garden - I remember crying when they chopped the tree down - my father kept the trunk which may still be there in the side building.
My father used to tell me of the times when the steam traction engines would stop outside to fill their water tanks.

The house is older than one might think - Wooden beams set into the inner facing battlement wall in the loft indicate that it was already an old cottage when it was converted to a folly chapel in the 1760-70s.

In this map from the original series of the Ordnance Survey in the 1880s you can see Chapel House and the accompanying well marked: 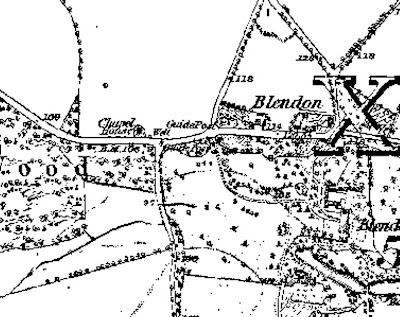 An unexpected addition to the day!
Posted by WeepingCross at 21:55 9 comments: Links to this post

I had the most astounding phone call the other day. Last Sunday I baptised a baby boy for a young couple from the parish who are very marginally in contact with the Church. Their ideas about God are as vague and unformed as you could imagine. I went round to visit and explained the service and what it was about as I always do, at least when first children are involved. They were obviously slightly nervous and uncertain but doing their best to be agreeable, and the baptism service was a good occasion. It was, however, the Sunday when the weather turned dull and oppressive, and it was thundery, hot and overcast as I went home and left them to mill around outside the church taking photographs.

In the middle of the week I got a phone call from the baby's mum. She was stood outside the church, crying. 'I just wanted to have my baby christened,' she said, 'And we came out of the church and there was thunder. I know one of the godparents isn't religious. I need to know if Jack's going to be all right.' She couldn't say much more because she was so tearful, so we talked a little, in as understandable a way as I could make it, about her ideas about what God is like, about the fact that there would have been loads of christenings that day and thunder is a natural thing, and that God knows she wants the best for her son and will accept that and take it seriously. I said she should light a candle for him in the church, pray for him and encourage him to pray when he's old enough. I said these are the kind of thoughts that go around the heads of many people, but we don't all talk about them.

I felt both amazed that she was so upset by these superstitious thoughts and not able to brush them away like most of us do, and quite pleased that she felt the priest was the right person to talk to about them. At least she must have thought I wasn't likely to tell her off. And she loves her son.
Posted by WeepingCross at 11:47 1 comment: Links to this post