Threnody for a Dream 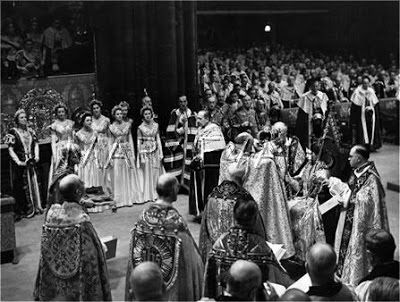 Another longish absence from these pages; I find myself at the end of each evening with little energy left for anything creative, even rambling on the internet. So these thoughts are long, long out of date; I wrote most of them at the time of the coronation anniversary.


One of our home discussion groups meets on a Tuesday evening and spent their last session discussing the anniversary of the Queen’s coronation and His Grace of Canterbury’s sermon thereat. I understand they talked round the subject, and round it again, and came to no firm conclusions beyond, by a short hair, preferring the hereditary monarchy to any other available means of selecting a Head of State.
On the wireless in the afternoon I heard Simon Jenkins debating about the same topic. He argued, very forcefully, for a reform of the monarchy that would sever its connection with religion, so that the next coronation would happen somewhere other than a church and divest itself of any mention of God. There was some odd reasoning in this – stating that the Church had ‘hijacked’ the monarchy was an idiosyncratic reading of history – but the overall point that religion, and particularly the Church of England, doesn’t mean much to most people is hard to refute. What struck me most, however, was Mr Jenkins’s contention that this new conception of monarchy would reflect the fact that ‘the monarch exists because of the State’. Constitutionally, I always thought the opposite was the case, that the monarch is prior to the State and authority flows from her, which is precisely why republicans object to it. I noted that never once did Mr Jenkins refer to ‘the people’; his case had a decidedly Hobbesian tone.


My opinions of hereditary monarchy have reversed polarity more than once over the course of nearly 30 years, although they have become more settled since being a Christian. I’ve argued – at least recently – that the existence of the monarchy acts as a sign pointing beyond the structural arrangements and ideological conflicts of the polity to the primacy of human relationships and personal loyalties, as well as to an authority which is outside those structures. The dream – my dream – was that at the heart of the State should be a powerless monarch anointed by a powerless Church, a standing reproof to notions of human power and rivalry. I don’t think we’ve ever actually got there, because for it to work requires both monarch and Church consciously to embrace their own powerlessness. To be Christlike. We were getting there – certainly the Church of England has been – but at the very moment when it becomes possible for us, the dream seems to become socially impossible. The monarch exists because of the State. Perhaps this is what we believe now; perhaps it’s no more than the truth.
We live in a time when the State extends more and more claim over us. One of the assumptions on which the progressive case for same-sex marriage is that marriage is a legal condition which doesn’t exist until the mechanisms of the State create it – not merely recognise it, as is the present theory. The family is a site of danger and threat in which parents are not to be trusted to raise children, and neither are workers ranging from teachers to train drivers to be trusted to get on with their work supervised by their own professional bodies, but need the structures of the State to check them, rate them, punish them. The lies that the State perpetrates and the fears it arouses to justify doing this only dramatise the process.


If it’s true that the monarch can no longer – if she ever could – function as a sign that relativises all this, which points beyond it, then I can see no point in the Church’s anointing of it. I suspect that the sacral conception of monarchy tenuously survives only because the Queen is personally a devout Anglican who believes it herself, and when she dies, it will more than likely die with her. Then it will indeed be true that the monarch will exist to serve the State. In those circumstances the shreds and tatters of sacral monarchy can’t achieve anything more than obscuring the truth.
I feel somewhat the same way about the liberalism to which I’ve held tenuous allegiance over more than twenty years; that it seems rooted in a philosophy entirely inadequate to cope with the world we find. As the State becomes a black whirlpool sucking into itself all meaning and definition, the situation ordinary people are in require something more than benign confidence in capitalism, individualism (though not too anarchic) and mild reform; like the old monarchy, I begin to suspect that liberalism itself simply decorates falsehood. And we need truth, so far as we can get it.
Posted by WeepingCross at 22:02 No comments: Links to this post