At the start of the month I married the local scoutmaster's son to, well, somebody else. The scoutmaster asked whether I would like to come to the Cubs' camp in a few weeks' time and bless their new flags. So Saturday saw me drive into the Surrey wilds armed with the Book of Blessings, my tat and a very dubiously related reading (Isaiah 11.6-10, which mentions God's 'banner' being raised for the nations right at the end, that was the best I could manage). It was all rather charming. Not very many Cubs, it has to be said, and some very un-Scout-like polythene tents, but lovely weather and a reflective mood. I blessed the flags, they were raised and saluted, we had a cup of tea and I left. Curiously mums and dads were also present with the lads, whereas I'd've thought half the fun, if fun is to be had, would be to escape your parents for a couple of days. Still, I suppose in the modern world this is not to be permitted.

I was never part of any paramilitary uniformed organisation in my youth, but looking on at this relaxed, cheerful event I couldn't help thinking that something of the kind (and to be fair perhaps the Scouts were not like this thirty-odd years ago) would have done me good. Astronomy, playing with rafts, and controlled channelling of natural pyromania actually sounds rather appealing.
Posted by WeepingCross at 21:22 No comments: Links to this post

So Mad Trevor phones me up to try to persuade me that I should be setting up a 'conference on prophecy' and 'preparing people for the End Times'. He's been watching the God Channel and 'real Christians' who have prophecies about the end of the world. I tell him quite calmly what I think of the God Channel, and that I know the end of the world is coming because that's a basic assumption of Christianity, but am not sure that setting up a conference on prophecy is the right way of preparing ourselves. He shouts at me that I and the rest of the Church are blind and ignorant and that he can see that the End is imminent, and hangs up.

Of course no matter how I calm I am about this it still upsets me. I regularly have dreams which hint at, if not the Apocalypse itself, a horrible world-encompassing event whose nature is never quite defined. But thinking about it, I'm not convinced that, even if I knew for certain that the Day of Judgement was tomorrow, or in a week, or a month, or whatever, I would be doing anything differently. I don't believe people are saved by this or that act, so frantic attempts to produce demonstrastions of faith in unbelievers are beside the point, nor do I think walking the streets proclaiming the imminence of the End would be the way to do so. If there is anything I'm doing which is contrary to God's will, or something I'm not doing which I should be, that's true regardless of how near or far away the Eschaton is; the imminence of the End might sharpen the attention, but that's all. It's coming and that's all we need to know.

And living in expectation of the End is always suggested as something fearful. But for Jesus the nearness of the Kingdom (both experientially and eschatogically) is precisely Good News - 'the time is fulfilled, the kingdom is near'. How could the triumph of justice and love, the healing of wounds, the wiping of tears and the vindication of Christ's poor, be anything other than a promise, not a threat?

I walked up the hill from church towards the Rectory and I didn't imagine the houses and people along the road burning and consumed with fire, but burning with light - transfigured into what they are at their very best. Perhaps I just need to pour more of the Eschaton into what I do.
Posted by WeepingCross at 19:24 1 comment: Links to this post

The life of a modern clergyman. At least this one, at least today. Baking. I feel compelled to point out that makes one-third of the total of cakes. 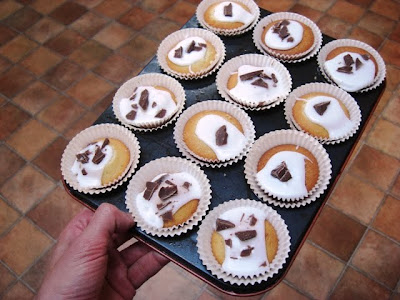 Posted by WeepingCross at 20:50 No comments: Links to this post

A couple of views of this grim and beautiful display of Polly Morgan's work at the Haunch of Venison gallery in Piccadilly, which I went to see with Cylene the Goth. Only four sculptures - but what sculptures. The show's on until September 25th. 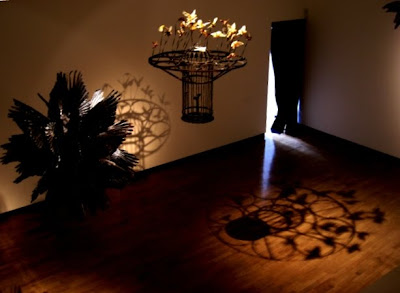 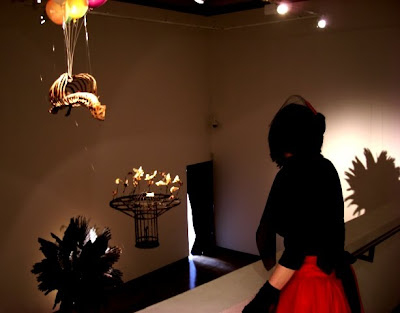 Posted by WeepingCross at 20:42 No comments: Links to this post

I was half-listening to Great Lives on Radio 4 this afternoon, as Matthew Parris and Bettany Hughes discussed the great Sappho. Given her passion for young women, was she, they wondered, particularly a problem for later Christian writers? Perhaps in the West, said Ms Hughes, but not apparently in the East. 'But then the Eastern Orthodox Church used to carry out same-sex marriages, so they might have had less of an issue with her', she went on.

Hang on. Let's rewind a minute. The Orthodox Church used to carry out same-sex marriages? Really? The same Orthodox Church which insists all its clergy grow enormous beards to demonstrate their sound, healthy maleness? If this was so, it would at the very least cast an interesting light on current debates regarding Christianity and same-sex relationships. Wouldn't it?

In fact it didn't take a great deal of Googling (one term, in fact, to wit 'same sex marriages Byzantine') to discover the source of this particular bit of pseudo-history. It's John Boswell's The Marriage of Likeness: Same-sex unions in Premodern Europe, published back in 1994 and subject to an AWFUL lot of criticism then and since; not a work I was otherwise familiar with. Boswell's case was, to summarise, that the Orthodox rite of 'brother-making' or adelphopoiesis was, in effect, a sanctioning of same-sex relationships. Even though he was careful to point out that such relationships were not 'marriages', his using the modern phrase 'same-sex union' to describe them implied that they were in all but name. It doesn't take much thought to work out that this was certainly not what the liturgists intended the adelphopoiesis for. John Boswell was both gay and a devout Roman Catholic, and it isn't a calumny to suggest that may have had some effect on how he interpreted his evidence. The most we can say, rather as Alan Tulchin argues about the rite of affrerement current in medieval France, was that a legal and religious condition intended for entirely other purposes may have been used by men who loved each other for a different one. I find that far more nuanced and believable.

But look at how it translates into popular consciousness: 'Orthodox Church carried out same-sex marriages'. Of course it didn't. Yet, because Bettany Hughes is 'a historian', anything she says about 'history' runs the risk of going unchallenged no matter how far it lies outside her own range of knowledge and experience. There's an awful lot of history, and (not being too rude), Ms Hughes's 2:1 and apparently incomplete post-doc doesn't equip her to know about all of it.

This isn't the first time I've encountered liberal Christians overstating historical evidence out of enthusiasm (to put it at its kindest). I remember being excited over hints that there were women bishops in earlier Christian centuries, only to discover the more sober truth that the title 'episcopissa' or 'episcopa' meant a bishop's wife or a mitred abbess. My own moment of temptation came over St Lide, the hermit and bishop who dwelt in the tenth and eleventh centuries in the Scilly Isles, and whose feast, as bishop, is mentioned in the Calendar of Tavistock Abbey. But Leland, the great 16th-century traveller and shrine-sampler, refers to Lide as female. A female bishop in 10th-century Scilly? One might like to believe such a thing, and so one is so very, very tempted to go further than the facts really justify. It's the Gladiator Girl syndrome. And the less said about that, the better.
Posted by WeepingCross at 21:29 4 comments: Links to this post