There, All Better Now

Last year the General Synod met and threw out the draft legislation about consecrating women as bishops, throwing the entire Church of England into a convulsive fit of soul-searching and introspection, and the media into a rare degree of interest in the Church and its doings. The story was everywhere. A couple of days ago this November's Synod voted through a new draft provision with remarkably little dissent, and unless something unexpected happens it will proceed to be passed in July. The antis, by and large, professed themselves satisfied with the new regulations to order their relationship with putative future women bishops. Gosh. Naturally the media barely noticed, even though 'Church of England decides something sensible' is actually quite big news.

When I've met with my clerical colleagues lately I've noticed a curious and I think new commitment to the idea of the breadth of the Church of England as something good and God-given in its own right, something that contributes creatively to the life of the Church as a whole, way beyond the confines of Anglicanism. I am not quite sure how this has happened, although as it's just what I was arguing for last year I am very pleased indeed. I wonder whether it's anything to do with the example of Papa Francis in Rome, and a strange sense of openness and optimism flowing around as a result.
Posted by WeepingCross at 18:13 No comments: Links to this post 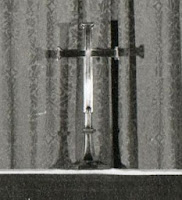 Nobody wants phone calls from the police, still less before one's customary time of rising on one's day off. In those circumstances one's only consolation is that it probably isn't one they are after as they wouldn't have phoned up first. In the case to which I refer particularly, a week ago last Thursday, it was PC Blackley telling me there'd been a break-in at the church. It wasn't, as it turned out, much of a break-in, just the leaded windows in the vestry smashed and whatever was within reach grabbed and pulled out sometime over night; I'd wondered about the wisdom of keeping stuff in view of the windows but comforted myself that the window bars would keep ne'er-do-wells out, and didn't realise that the bars are in fact flimsy leads that are easy to pull out. So we lost, very unhelpfully, one of each pair of silver candlesticks, the low steel ones we use on a Sunday morning, and the rather elegant silver cross which I suspect is 1920s or 30s. I say 'silver': 'white metal' is a better description as they don't seem actually to be silver in anything but colour.

It was all horribly inconvenient and we are still using my Nan's old brass candlesticks as the nearest appropriate ones to hand. I spent a while hunting online for replacements and came up with nothing very suitable.

Then on Friday afternoon the police called again: having had 'information' they had visited a flat in Aldershot and removed a number of items they suspected were ours. So it proved. We don't yet have them back, but they are safe in a police station over there and will be heading in our direction soon.

I was surprised at the reaction the incident aroused. There isn't anything obviously more wicked about breaking into a church and robbing it as opposed to someone's home. From a human point of view, nobody clearly owns the church kit as such, and we're insured, aren't we? There is of course the issue that two of the candlesticks were given in memory of someone whose relatives are still active members of the church, but that's incidental. I suppose behind the outrage (which was even expressed by an atheist friend of mine) is the feeling that churches represent a group of people who, belief quite aside, are trying their hardest to live according to the very best ideals they can manage. To assault the church is to do injury to that idea, and anyone of whatever belief can understand that.
Posted by WeepingCross at 18:01 No comments: Links to this post 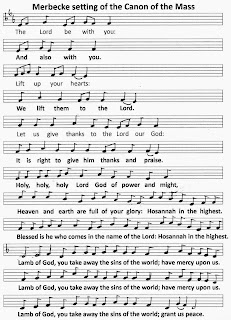 At Swanvale Halt we customarily sing the eucharist to the St Thomas Mass, which is a tolerably pleasant setting. It only dates to the mid-1980s, and was commissioned by former Bishop of Salisbury David Stancliffe when he was Provost of Portsmouth Cathedral, and is now very widely used - ours isn't the only church in which I've met it.

However for the Midnight Mass on Christmas Eve I've striven to return to an earlier and generally more splendid way of doing things, and have raised the question of using the old Merbecke setting of the Mass for that service, which again I'm very used to from other places. We say 'Merbecke' but basically all John Merbecke did in 1550 was to take the old plainchant melodies for the Canon of the Mass and bolt them on to the new English liturgy in simple forms so that the congregation could join in. I think the plainchant introduces an element of solemn and plaintive beauty, a raising of the soul in awareness of sorrow and of joy, which isn't present in some of the modern settings.

What surprises me is that even the older members of the congregation here don't seem to recognise the Merbecke music. I wonder what was used here before the St Thomas Mass was brought in, and, even more, before the introduction of the alternative forms of service to the Book of Common Prayer in the 1960s. The Choir are convinced there won't be a problem singing the Merbecke, but the congregation as a whole will need some priming during Advent or it won't work. The Midnight should affect newcomers by beauty, and if the singing is thin and uncertain that won't be the case.
Posted by WeepingCross at 08:31 No comments: Links to this post 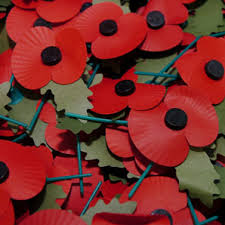 Awfully late as usual, I know: we kept Remembrance at Swanvale Halt on Sunday 10th, though for a second year I had to be absent, much to my regret, leading prayers at the War Memorial at Hornington as Chair of the local branch of Churches Together. I hope a suitable layperson will come forward to do that job next year, although precipitate haste in this respect seems to be somewhat wanting.

For the last couple of years the children in Junior Church have come forward at the appropriate point to lay wreaths at our memorial in the church, but we decided that, as we can't guarantee there will be any children in the congregation at the moment, and as the ones we had never seemed especially comfortable with the whole experience, we would get grown-ups to do it. I asked Bill, a longstanding member of the congregation who served with the Navy in WWII, and Cora, a young Army wife from the Council estate who has no connection with the church other than the fact that she and her husband had their banns read with us a few months ago. Apparently it all went very well, and the fact that an elderly worshipper fainted during the Two Minutes' Silence and the paramedics had to be summoned didn't cause unreasonable disruption. In fact I wonder whether very many folk noticed.

I have to compliment the Poppy Appeal for their efficiency as I discovered on the Wednesday that we only had one wreath and had to order another. I couldn't get through on the phone and the only way of paying was using that archaic business of posting a cheque, a combination of not one but two near-obsolete processes. And the wreath arrived on Saturday morning.

A friend of mine complained on Facebook about the levels of 'poppy fascism' this year, remarking that, as far as she recalled her own childhood, the dragooning of the whole of society including small children into the observation of Remembrance is a relatively recent development. She tried to keep her daughter away from it only to discover that the whole infants school she attends had been marched to the War Memorial and said little girl, egged on by her High Tory dad, insisted that she should have a poppy though probably more for the colour than for any historical and emotional significance. I think my friend is right about the change in the way Britain thinks about Remembrancetide, but still maintain that it's possible to maintain a proper sense of decorum about the whole thing; recalling the deaths in war not only of combatants, but also civilians, and making sure that politicians are kept firmly in their place in Remembrance observances - permitted, perhaps, to lay wreaths, but certainly to do or say nothing else. In fact, I think that a sharper-eyed assessment of the reality of war is precisely what has allowed the emergence of the modern reverence for the rituals of the second Sunday in November.

I suspect Blackadder has much to do with it as well.

Posted by WeepingCross at 22:03 No comments: Links to this post