Think of the Children 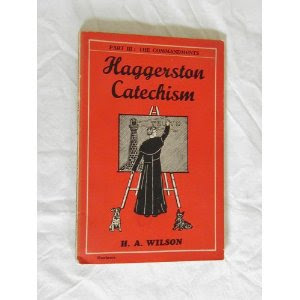 I am gradually collecting all the instalments of the famous Haggerston Catechism composed by Fr HA Wilson in the years around the War and published in seven parts in later years. They aren't very common as they were printed on floppy paper, and having bought the sections that survive in reasonable numbers I'm now down to the rarer ones; the volume on The Lord's Prayer is on Abebooks at the moment for £90 ...

The striking thing about Fr Wilson's catechism classes was that they comprised a two-year introduction to the Christian faith for children, spread out over a full 120 sessions. There was an assumption, probably in those days not completely unrealistic, that children would be there on most of those weeks. They also must have been pretty attentive for any of it to go in.

We have an after-school club at Swanvale Halt that runs for an hour on Wednesday afternoons in term time. There are never more than a dozen children (whereas it's clear that Fr Wilson expected many more than that at his catechism classes) and we start with a paper-based activity, have a story, craft activity, run-around game and prayer at the end. Imparting any information to the children, even in the form of a story, is like pulling teeth. Getting them to be quiet long enough to get a word in edgeways is sometimes an achievement, as it was this week. They clearly don't think of our sessions as 'school' in any sense. None of them are maliciously rude, they're just enfuriatingly silly and it's difficult to know how to approach it: we adults continually comiserate with one another after it's all over that 'we never behaved like that with grown-ups' and therefore I don't think we know what to do. A conversation with the headmistress, who commands the entire school in whispers, may be in order!
Posted by WeepingCross at 20:14 3 comments: Links to this post

We have a new colleague in the clergy team locally who is looking after the daughter church of Hornington Parish Church. She led Morning Prayer the other day, on the weekly occasion when we gather together to say the Office rather than doing so in our respective churches. We read the unwieldy wodges of Scripture that the Lectionary foists on us daily, and our new colleague asked if we'd like to share any reflections on them, not something we're used to. There was silence and to kick things off she made a very proper, pious statement about trust in God the connection of which to the Old Testament reading I couldn't quite see. I then said I'd found that particular reading completely incomprehensible until I remembered how a New Testament passage had taken up the imagery. The Rector of Hornington commented how the reference to trees had made him think of Christmas trees which were much on his mind.

Perhaps it's because, alone among the other clergy locally, I am single that I reach the point where I can't stand the sound of my own voice. There are moments when I'm attempting to lead prayers, for instance, when disgust at the appallingly trite agglomeration of reorganised Christian clichés that's coming out of my mouth threatens to overwhelm me completely. 'Oh for God's sake, shut up', I want to tell myself. That's one of the reasons why I like the Office, because they are not my words, I'm not constantly having to produce stuff, but can just listen to God for a while. Does anyone else ever feel the same? Perhaps I may find out.
Posted by WeepingCross at 20:01 2 comments: Links to this post