The Bad Vestments Blog is a little acerbic at the moment, so I thought it would be uplifting to look at some nice tat instead. 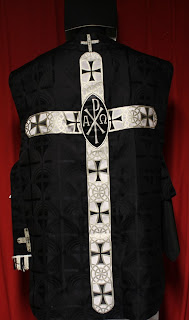 This black set is interesting rather than very beautiful - perhaps a 1950s or 60s attempt to produce something up-to-date while retaining the old forms. The round-ended cross orphrey is a bit uncomfortable, but the Celtic knots and the weave in the black silk ground fabric looks very handsome. 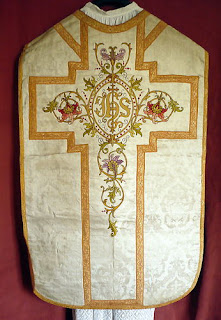 The white set to the right is quite similar to my own old white set. The floral patterns on the orphrey are nicely elaborate without being as, well, flowery as some you occasionally see.

Both these chasubles appeared in recent eBay sales.

Posted by WeepingCross at 19:24 No comments: Links to this post

'Could you come and see my mother?' said the lady on the phone yesterday. 'She's dying and we think she would like to see a vicar.' So I pedalled down to the church, collected the Oil of the Sick and the Blessed Sacrament, and headed off to one of the local nursing homes where I met Ruth, unable to speak and possibly not hearing much either, drifting in and out of sleep. So I did as much of the standard Last Rites as made sense, assured Ruth had been a regular churchgoer in the past, and her daughters seemed to think that would have helped.

My experience of ministering to the dying has been unsatisfactory, really. I don't remember getting any preparation at theological college, and I think Il Rettore at Lambourne assumed I knew what to do, while I assumed I did as well until it became clear that there was an actual form to follow, at least in the old rites. In fact, I've only just become aware that there is a provision in Common Worship that covers the standard Last Rites of Confession, Absolution, Unction and Communion. The trouble is that none of the available rites seem completely satisfactory. The old 1662 Prayer Book order for the Visitation of the Sick has some beautifully moving prayers in it, but also suggests rather too strongly for modern tastes that any given sickness is a distinct expression of God's will. The traditional Roman Rite is better in tone and explicitly includes Unction, of course, but is massively lengthy and has a number of rather bizarre prayers. The Common Worship provision includes all four elements, which is a considerable triumph for Catholicism in the Anglican Church, but its prayers are comparatively watery. So, as so often, I've ended up cobbling together my own version, which is not what you're supposed to do.

Clergy are so rarely now called to somebody in the final stages of life, still less have a chance to minister to a person over the course of an illness, which is what the liturgies anticipate as the standard. This makes it all the more necessary to have some kind of coherent, standard pattern that at least satisfies you so that you can depart from it as circumstances dictate. As even the Rituale Romanum says:

The Church presupposes ideal circumstances, or at least normal ones, as witnessed by the Roman Ritual, for carrying out her many prescriptions with dignity, edification, and effectiveness. Take, for example, the rubrics for processions, for the burial service, for communion brought to the sick, and for the sacrament of anointing of the sick. Yet how often her wishes in these matters are interfered with by enfeebled faith, by adverse conditions of weather, by an urge to rush through everything, or by inadequacies as to place, appurtenances, and participants. This is especially true in the case of conferring the sacrament of Christian consolation to the sick or dying. How often in our day, when negligence or violence or accidents or sudden seizure with fatal illness are by no means the exception, it is impossible to give this sacrament at all, or it is administered only in greatest haste, with curtailment of all but the essential anointing, thereby losing for the recipient as well as the bystanders so much of its signification as the Christ-mystery which heals, soothes, strengthens, purifies, consecrates, and ushers the Christian's soul into the joys of everlasting beatitude.

Posted by WeepingCross at 19:15 No comments: Links to this post

When I last went to the Medieval Galleries at the V&A they were very new, and my second visit today revealed a lot of different stuff. I was particularly struck by this wonderfully inventive way of dislaying religious tat: 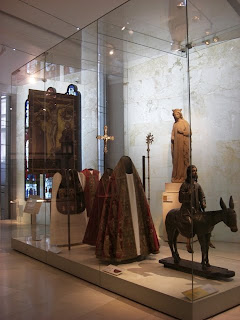 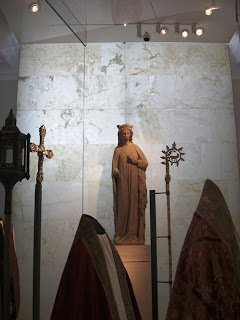 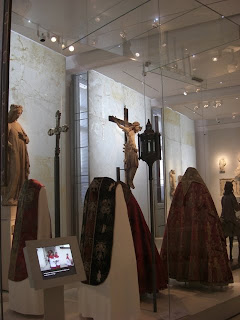 OK, this is a completely fictitious set-up - no chasubles would appear in a procession, nor would all these objects find themselves together at the same time or in this order - but it's a marvellous way of animating the artefacts while not distracting in any way from their charisma - quite the opposite, in fact. Plus the boost this single display must have given to the plate-glass industry!
Posted by WeepingCross at 19:24 1 comment: Links to this post

What a day of contrasts. At Widelake House this morning they'd forgotten we were coming and the staff rounded up a strange collection of residents and day visitors, virtually none of whom we'd ever seen before. Normally they're very placid but today were actually rather awkward; one lady was tearful and repeatedly complained of being lost (which is quite understandable), but another remarked loudly and scornfully 'What's wrong with 'er?' and, regarding me, ' 'E don't look like any vicar I've ever seen. If 'e's a vicar, I'll eat my 'at'.' I wonder what vicars do look like, and should I change?

(Only yesterday a parishioner - not one I've ever seen in church - accosted me and congratulated me precisely for 'dressing like a proper vicar'. 'I'm glad that bloody woman's gone,' he further offered, meaning my predecessor, 'couldn't get on with her'. The day before, one of the local alcoholics had been telling me what a good friend she'd been to him, which just goes to show. What will be said about me after I've gone? I shall just have to outlive them all).

Then this afternoon we had Church Club after school. The children were particularly nuts today. Ben couldn't seem to sit up straight and continually ended up on the floor, gyrating in strange convolutions and cycles, while Michael appeared to have his hands permanently down the front of his trousers. You can't help speculating what will become of them.

I finished off the day with the solemn observance of Candlemas which attracted a dozen people. I'm very pleased about this! We processed around a darkened church to the accompaniment of the Office Hymn, Quod Chorus Vatum, which has been a pig to learn but went rather well. Next step is to get the people themselves learning plainchant ...
Posted by WeepingCross at 20:08 1 comment: Links to this post

My travels took me to Guildford today. On Farnham Road I found what may be, unless you know better, Britain's most elaborate bus stop. 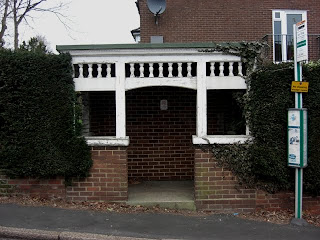 And it's not just the balustrade, but these amazing carved figures inside. Turkish chap with a pipe and a figure with a lyre - not sure what that's about, nor why it should be here. On the 1873 Ordnance Survey there is nothing along Farnham Road apart from the Hospital, which lies a couple of hundred yards downhill from this. A mystery. 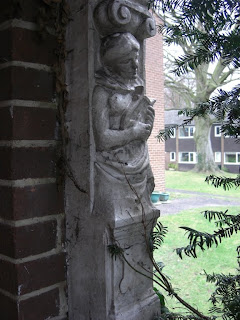 Posted by WeepingCross at 21:29 No comments: Links to this post