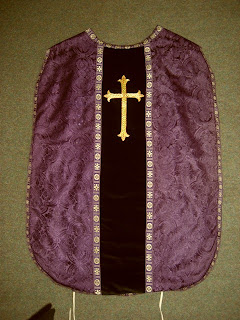 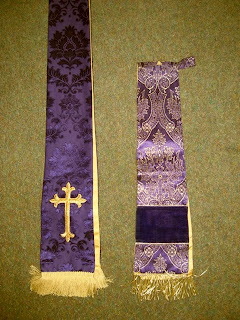 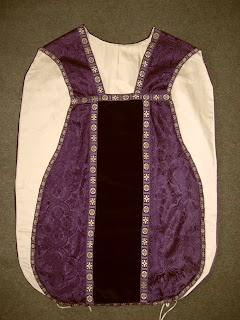 A pretty cursory inspection will reveal that the Purple Set isn't a set at all. It came about like this. The chasuble I discovered at one of my favourite hunting-grounds, Church Antiques in Walton on Thames, but it consisted just of the purple jacquard fabric and the braid. It also looks distinctly home-made - it isn't symmetrical and doesn't actually hang straight, especially on my slightly wonky shoulders. It must have looked very strange if it was ever used, but it had ties to secure it which implied it HAD actually been worn. I didn't notice how rough it was until I got it home but by then was determined to make something of it. I laid a coarse interlining (it was a pig working out all the irregular bits to fit), sewed on a light gold-coloured lining, and then put black velvet down the orphreys. The purple is actually a lovely shade and works very well with the black. I think all chasubles should have a cross on the back, so bought the embroidered cross from eBay and popped that on as well. This isn't my favourite chasy by any means - it's only 36" from neck to hem, which is short on me - but it works OK despite the efforts of some mysterious substance which somehow got onto it while I was doing the work and attacked the fabric at various points.

The stole came from Mr Taylor of the Cowley Road, Oxford, who made my white ordination stole, and the maniple was an eBay purchase. Its fabric is really spectacular and I can only imagine how gorgeous the chasuble must have been that was associated with it, but despite being from another set entirely it fits fine with the other pieces.
Posted by WeepingCross at 21:20 1 comment: Links to this post

At Lamford we didn't have a Palm Sunday procession, but they do at Swanvale Halt, which is rather good. This year we (all right, I) revived the custom of knocking on the church door with the processional cross to the words of Psalm 24, 'lift up your heads o gates, be lifted up, you everlasting doors, and the King of Glory shall come in ...'. The dramatised reading of the Passion Gospel had a cast of thousands, and to my astonishment the whole congregation spontaneously knelt at the death of Jesus. I had no idea they were so well-trained.
Posted by WeepingCross at 18:45 No comments: Links to this post

To give the Young Lord Declan a break I took the Goths on a long trek around Gothic Revival buildings in London on Saturday. Last year I did one on churches in the City; this time I'd been telling people it wouldn't be as interesting, as architects aren't as mad as clergy. How wrong I was. As we neared the end of the tour, one of my chums said they were remembering the buildings by the fate of the architect: died insane, suicide, insane, drug addict, suicide ... We speculated whether it was more the case that lunatics designed Gothic buildings, or whether drawing endless flying buttresses and arched windows actually drove people mad. Dr Bones once looked across at Pugin's masterpiece, the Palace of Westminster, with me, and remarked 'Look, a building designed by someone who was mentally ill'. What? 'Everything is repetition, repetition. You have to be mad to design that'.

The rain drizzled a bit as we paused at the Royal Courts of Justice (GE Street) and traipsed up into Clerkenwell but after that we were fairly kindly treated by the elements. My planned surprise view of the Grand Midland Hotel (GG Scott) by approaching it from the tangle of residential streets to the south worked exactly as planned, and the final stop at All Saints', Margaret Street (W Butterfield), achieved the intended result of wonder and admiration. I wore my second best top hat, considering the weather.

Thanks to Mrs Pacanowski for the photograph of us at Margaret Street. 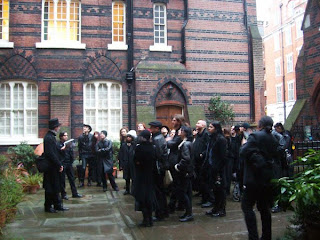 Posted by WeepingCross at 21:37 No comments: Links to this post

This Sunday was Passion Sunday. I love the custom of veiling crosses and images in Passiontide as a sign of the increasing concentration on Christ's suffering and sacrifice and the removal of distractions. We re-introduced it at Lamford in my second year and this year veiling returned to Swanvale Halt. 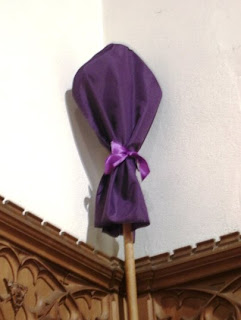 Our sacristan had a whole pile of veils at home. 'We'll have to go through what you want veiled', she said. 'This is the first time we've done this in 15 years'.
Posted by WeepingCross at 22:02 No comments: Links to this post

The young couple wanted their baby son baptised as part of the main service. Great, people so very rarely ask for that. They also wondered whether it could be 14th March. Fine, I said, not realising when I agreed that it was Mothering Sunday and so not the usual Sunday morning eucharist but a Family Service, and not a common-or-garden Family Service, but a super-charged Family Service with all sorts of stuff going on. Hmm. Oh well, I decided, let's go mad. What can happen? Do the lot!

So, yesterday morning we had over three hundred souls in the church. It can't hold many more, and I suspect that level is illegal anyway. Various assemblages of Brownies, Guides, Cubs, Beavers and Rainbows paraded their standards which were inserted into a strange iron holder affectionately known as the 'Rocket Launcher'. I apologised to the congregation about the amount of paperwork they had to deal with (service sheet, baptism service card, notices, hymnbook, and flyer for the Spring Fair) and pointed out that I had more. The children from the infants' school came to sing, we dunked small child who behaved very well apart from a wriggling reluctance to be anointed, blessed and distributed posies for mums, and somehow prayed. The organist played a storm and finished with Vidor's Toccata. 'You seem capable of making something out of chaos' said one of the regular congregation to me. Whatever it was it can't have been 'order'. We usually think Maundy Thursday or the Paschal Vigil is the most complex liturgical event of the year, but now I'm not entirely sure.
Posted by WeepingCross at 13:07 1 comment: Links to this post

Button Your Eyes
Posted by WeepingCross at 20:03 No comments: Links to this post

I've just come back from the New Vicars Course, or 'consultation' as they are pleased to call it. About ten of us from the southern dioceses (surprising there weren't more, really) gathered at a Roman Catholic abbey and discussed paperwork, conflict management, attitudes to change, and a variety of fascinating matters. The trouble with all this is that, while people are the same the Church over, context is everything and every parish's context is different. 'Understanding Change' is an interesting term. My problem is not some amorphous thing called 'Change', as everything changes all the time, even when it doesn't look like it is. It's changes, the real, actual things you may have to face and do, that are more difficult. Moves away from the concrete and the real to the theoretical are, I think, usually a sign of something wrong intellectually.

Whatever the event ended up being called, it didn't really tell me anything earth-shattering I didn't know, though it provided a good deal of food for thought. Chief among my thoughts, which I think I probably voiced a bit too often, was the growing realisation that I was in a rather different position from all my brother and sister clergy. Firstly they were almost all struggling to move sluggish congregations from hidebound services - Prayer Book Mattins being the chief culprit (I know what the Heresiarch will say, but people simply don't come to Prayer Book Mattins, and nor would you), whereas I'm trying to take things backward if anything at all. Secondly, and far more importantly, I realised that Swanvale Halt is simply rather an excellent parish.

Notwithstanding my grouses when I started, I eventually realised that not one member of the church has criticised any other member of the church to me. There are two good and supportive wardens, an efficient administrator - not enough money or people, but that's my problem as much as anyone else's. My colleagues complained of curates they'd inherited undermining them, being denounced by their own church councils, woefully inadequate staff they can't do anything about ... 'I almost lost it over Christmas', said one young female vicar in her mid-thirties. 'My administrator isn't very good, but the PCCs want to bully her out, and if I let them, they'll be after me next'. My old vicar at the last church I worshipped used to wonder 'how people can come to church and say the same things week after week and it doesn't make the blindest bit of difference to them'. Apparently, it actually has affected my lot, thank God.
Posted by WeepingCross at 21:14 2 comments: Links to this post