This isn't strictly about religion, but still. I walk to church in the morning past hordes of children on their way to our parish primary school, and a good few greet me as I pass them. This morning I was passed by two little sisters who live round the corner. "Hello James", said the bolder of them. "Last day of SATS today". Splendid, I answered, taken aback. What a country this is, where 9-year-olds look forward to the conclusion of a week of exams.
Posted by WeepingCross at 13:32 No comments: Links to this post

The diocese would quite like me to go to the parish of Swanvale Halt. I would quite like to go to Swanvale Halt. All that remains is to persuade the people of Swanvale Halt that they would like me in the same manner, so that we can avoid the tedious business of advertising the job and having competitive interviews, which is so ungentlemanly.
During the Clergy Conference I was determined to find out what was happening after my visit to the parish to meet the curate, only formally-instituted churchwarden, and a layperson who acts as 'unwarden'. The first words anyone spoke to me at the conference were those of the Archdeacon: 'I don't know anything'. It turned out that, although the curate felt she could work with me, the Archdeacon thought the Rural Dean was going to ask the laypeople what they thought, while the Rural Dean thought the Archdeacon was going to. It never occurred to the laypeople that they should volunteer an opinion. So nobody knew anything at all.
Yesterday I called the Archdeacons' secretary, who is the only person in the entire diocese who seems capable of pulling a finger out of wherever the fingers of preternaturally inactive yet chronically busy people normally are. Apparently the laypeople did like me, and want me to come for an interview. However it isn't clear whether this means on my own, or as part of a group, which naturally I would prefer to avoid as while I may be the best available candidate for Swanvale Halt in the diocese, I doubt I am the best in the entire Church of England. I refrained from asking why this wasn't ascertained in the first place. So we continue to wait.
Posted by WeepingCross at 21:45 No comments: Links to this post

We All Got Out Alive

This week saw 200 or more ordained people crawl snail-like unwillingly (if they had any sense) up the M1 to the Triennial Clergy Conference. Overall it wasn't quite as horrendous as the first one I attended, as a result of which the Diocesan Training Department came to the conclusion that I was mentally ill on the grounds that I wasn't very talkative; clearly not wanting to spend more time than necessary talking to Christian clergy is a sign of suicidal depression. Anyway. The speakers were excellent, including even the environmental scientist who helped us a good way along the road to the self-same suicidal depression with his take on climate change, and there was a wonderful atmosphere of hysteria. The conference had begun with a joke about prison camps and escape tunnels being filled in. On the first evening the Dean, following the theme, introduced the Bishop as the 'camp commandant'. 'Camp yourself, Mr Dean', replied our diocesan, a statement followed by a 'did-I-really-say-that-out-loud' look passing across his horrified face. That evening we'd been encouraged to renew our baptismal vows at an act of worship which was quite the gayest I'd been to since theological college. We all walked across a film of swirling water projected onto the floor while the bishops doused us with water using gigantic fir fronds which could only be wielded in a way that would have made Arnold Schwarzenegger look limp-wristed, let alone two middle-aged ecclesiastics in pullovers. I had to leave early to take a funeral (of a longstanding parishioner whose last act of service to the Church was to die at the right time to release me), so I missed the final Eucharist. Apparently during the course of this the (very Anglo-Catholic) Dean, standing next to the vicar of one of the big evangelical churches in the diocese, chose a rousing hymn as the moment to raise his hand aloft just as they might do in that very church. The evangelical vicar starts to giggle. The little phalanx of Catholics opposite, including Il Rettore, begin to giggle. Luckily the hymn ends before the entire event dissolves. The chapel, for some bizarre reason, sports a gigantic wickerwork parrot hanging from the roof (people tried to convince me it was an eagle). I hope to God the visitors from our twin diocese in France don't think the whole of the Anglican Church is like this.
Posted by WeepingCross at 16:42 No comments: Links to this post

Those Were the Days

My hunt to find a new job continues. On Monday and Tuesday this week it took me to Aybourne, a parish not far around the motorway from Lamford and a similar sort of place with a similar sort of biggish, liturgical church. I didn't get the job, but strangely enough although I've known about it and quietly cherished the idea of being Vicar of Aybourne for ages, when I left the interview I was gripped by a sudden and strong feeling that I didn't really want to go there at all. Just a bit too grandiose for my taste, perhaps.

The interview process was all desperately jolly, and in fact the parishioners were so keen to erode their church's reputation for being a bit stuffy that at times they ventured into the outskirts of hysteria. First I and my two competitors were shown, separately, round the church, churchyard (which is still open for burials), and vicarage (stripped bare apart from a few of the carpets which will also have to go since, I was informed, the former incumbent's dogs wee-ed on them). We were then whooshed around the parish to visit the primary school, dramatic castellated public school (like a miniature Wycombe Abbey) and technical college, before 'meeting the team' over tea and cake; I was introduced to a spectacular retired priest with a plum jacket and gravity-defying bouffant hair. Then we were billetted on various parishioners to relax for half an hour before 'trial by lasagne', otherwise known as supper with the PCC. The following morning was the interview itself, an hour of what amounted to concentrated spiritual analysis which I really don't want to repeat any time soon.

Frankly Aybourne, rather like Lamford, has had too much cash sloshing around in the past. The current vicarage is impressive enough, with soaring ceilings and rooms whose purpose is not really entirely clear. But it was preceded by this building, the Old Rectory, a structure so colossal it makes the Old Rectory in Lamford look like a chalet: 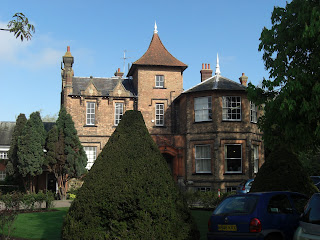 It now houses an entire junior school. The story goes that the then incumbent became Lord of the Manor unexpectedly after his elder brother died, and decided (suddenly having the money) to rebuild the church, in the process moving it to a more comfortable distance from his house. After all, Poor People might turn up, in theory.

The Church of Jesus Christ is always, inescapably, penetrated by the values of the world, but it seldom becomes so spectacular on a local level as it does (or once did) in Aybourne.

Posted by WeepingCross at 19:06 No comments: Links to this post