You may remember the difficulties I had recently with a house guest. The lady concerned turned up again after ten days or so, and called me from the local Red Cross depot where somehow she'd ended up, despite my firm instructions not to get in touch with me again. My phone was running out of juice so I went there in person, taking one of the churchwardens with me so I wasn't on my own. I left C.W. with the lady while I spoke to the local Red Cross man who told me she'd been calling round various hostels and advice centres for an hour and a half and telling each of them something different. C.W. decided to take her in. Admittedly as a former local councillor married to another one and having looked after strays before there wasn't anyone else in the parish I could conceivably have imagined asking to take her in, but I couldn't say it was a good idea.

Lady stayed with C.W. and Mr C.W. for over three weeks, going (and sometimes not going) to medical and housing appointments. Both neighbouring local authorities denied they had any responsibility for her. I wouldn't deal with her directly, but tried to investigate what she'd been telling people. She is adamant she always tells the truth, but when you dig into it you discover that while the actual words may indeed be true the impression they give is highly misleading. It was, for instance, true that her parents lived locally and that her mother's ashes are buried at the local crematorium; but her mother died in 2001, rather than within the last year as she implies, far too long ago to qualify for homelessness support from this council. Her cancer treatment happened, but not at the local hospital and instead at one coincidentally in the town where the local housing agencies insist she has accommodation and where she has property in a storage facility (which I paid for when she was staying with me). She's been put up by various people in this area for six months, which is long enough.

When it became clear to her that C.W. wanted her out, she began calling me again. I wouldn't get into conversation with her and asked her not to phone me as there was nothing I could do to help her situation, either providing somewhere for her to stay (there seems to be an assumption that I can just command parishioners to take people into their houses), or finding a caravan and somewhere for it to go which was her other idea - especially when the housing agencies insisted she should go back to her home authority. Finally on Friday I got several calls from the Citizens' Advice Bureau where she had an appointment. I went there to deliver a letter insisting she not call me or visit. I got two calls subsequent to that and then they stopped, not before she'd told me 'You're the only person I really trust, none of this is my fault'. Both I and C.W. expected a ring on the doorbell late at night, but the evening was quiet and she seems to have got the message - if she's still around. She may actually have done what everyone says and gone home. Perhaps none of it is her fault, though she hasn't helped herself by not coming clean about her past. But the point is that nobody in the Hornington vicinity, either the community or the council, can actually do anything for her.

Two things stand out for me. The first is how difficult it is actually to assess what somebody's telling you: local authorities, the CAB and housing agencies quite understandably have rules about how much information they can share, and various of the people I spoke to were very clearly trying to hint things without actually being explicit. That protects the vulnerable but if somebody wants to obscure the situation it plays into their hands. Secondly I've been worried about the spiritual effects this kind of thing has: when I came to Swanvale Halt I prayed at my induction service that I might be preserved from hardness of heart and few experiences have caused me to be as hardened and angry as this. Our problem lady clearly has many issues which have led her to be so strange and demanding, matters I can't cope with. I must try to remember that. She was always insistent that her integrity was very important to her and perhaps it is: perhaps her phone calls, despite my repeated and finally written demand that she not contact me, were genuine efforts to clear herself. Only God knows that now and one day will tell us.

An Update: I discovered today (11th June) that Problem Lady made £75-worth of phone calls when she was in my house which she somehow failed to mention. They're all made through Directory Enquiries which is why they're so expensive. That makes me feel simultaneously worse in pocket, and better in conscience.
Posted by WeepingCross at 19:40 3 comments: Links to this post

It was years ago that I went to Chichester so last week I decided to pay a second trip. You have to warm to a city that has Gothic road signs and tops its pedestrian signposts with little versions of the Market Cross: 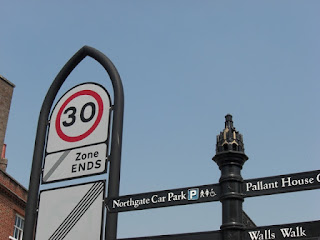 And this endearingly hideous gargoyle is on one of the buildings on West Street:﻿ 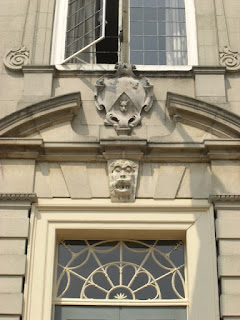 There is gaudy medievalism in the cathedral ... 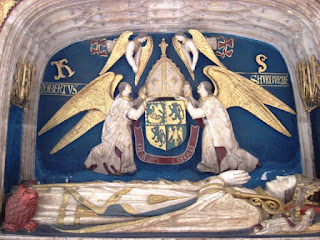 ... and Georgian restraint in the side streets. 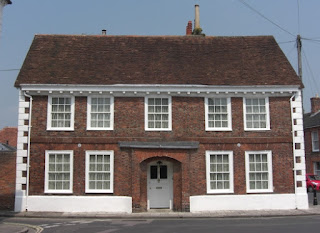 The head teacher of the infants school came up to me while we were getting ready for After-School Club last week. 'I don't know whether the church can make use of this', she said, and showed me a book. It is a big, brown leather-bound Bible, contained in a presentation case and marked on the spine with letters tooled in gold. 'Presented by the Secretary of State for Education', it says. Michael Gove has decided that, to celebrate the King James Bible and its contribution to literature and culture, every school should have a copy. It worked for Henry VIII, after all. Not just any copy, though, but a big, brown leather-bound copy contained in a presentation case and marked on the spine with letters, you will have recalled, tooled in gold. 'I really can't think when we'll use it', said HT apologetically. When she reads Bible stories to the children, it tends to be from the Lions Storyteller Bible, it has to be said.

It's an age of austerity when we're cutting back on public services and benefits to those who work for them.

It's a year late. The KJV anniversary was last year.

It's an INFANTS SCHOOL.

'In the beginning, the earth was without form and void'. And the Tory Party's grasp on reality remained that way.

Posted by WeepingCross at 22:01 4 comments: Links to this post

My garden is not yet open to the public, but last week I had one visitor: 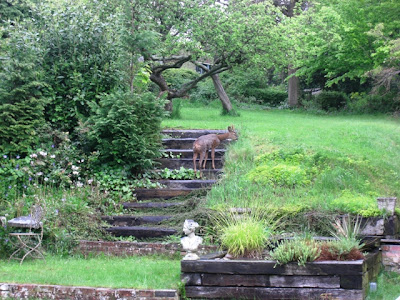 Even if she only came to eat rather than admire the statuary.
Posted by WeepingCross at 21:52 No comments: Links to this post

It's been ages since I posted anything here and I am well behind. For which many apologies.
Each year Swanvale Halt church spearheads the Spring Fair, a vast effort that has grown over the years to include about fifty stalls run both by the church and local voluntary groups and businesses, funfair rides, country dancing by the schoolchildren, vintage vehicles and so on. There is a very peculiar Punch-and-Judy man who implies in conversation that he has something to do with the intelligence services but somehow I doubt this. 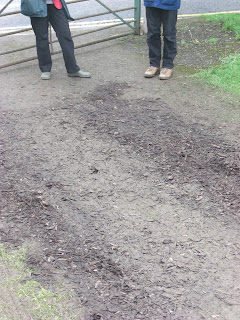 After weeks and weeks of rain it was touch-and-go this year whether the event would happen at all but the Council finally gave us the go-ahead to use the field we usually do. The forecast was not good, but at least dry. It began raining at 8.30 on Saturday morning and poured and poured until about 11. I turned up at 11.30 by which time the entrance to the field was so appallingly mangled that somebody had run to the DIY shop to buy a bag of woodchippings which were then sprinkled into the mud. 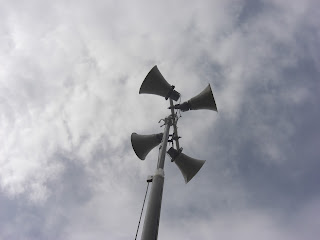 Eventually people began to arrive and thankfully we did actually break even. By the end of the afternoon there were even hints of blue in the sky. I got slightly irked by people claiming that it never used to rain on Spring Fair day when my predecessor was Rector. I have however seen film of the fair being set up in 1989 when there's a puddle on the field so big ducks are swimming about in it. We do need a bit of a rethink, though, and I think more games and things to do are in order. I am not, however, entirely convinced by the suggestion of one friend that we should race pigs. The static and malodorous and vaguely resentful donkeys who always attend are perhaps all the animals we need ...