One of my fantasy projects, to keep my brain and historical senses ticking over, is to write about the Catholic tradition in the Guildford Diocese, a bit like Roy Tricker did for Suffolk. You often find that churches retain traces of their past contact with the Catholic movement even if they've moved away from it: my 'law' is that Catholic teaching goes first, followed by the liturgy and spirituality that were made intelligible by the teaching, and finally by the fixtures and fittings that were demanded by the liturgy and spiritual life. Some of those are still there even in churches which have long since moved away from a Catholic identity.

On my day off this week I went to Bramley church, whose former incumbent was as a definite although uncombative Anglo-Catholic: he simply got on with his ministry which lasted quite a while. His successor, like my predecessor, wouldn't have described herself as an evangelical, but I don't think stood very comfortably within the Catholic tradition either.

All Saints' Bramley was mostly rebuilt in the 19th century although the chancel, says Pevsner, seems to retain its original 13th-century form and masonry, a bit smothered in modernity. It was refurbished and rededicated in 1911 and currently looks like this: 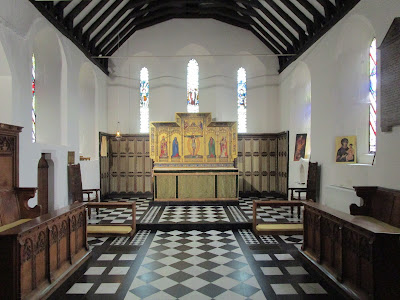 You can see here the waves of Percy Dearmer-esque Anglo-Catholicism which swept swathes of churches in the second, third and fourth decades of the 20th century. In Bramley, 1911 saw the installation of that great golden mock-Italian reredos, the choir stalls, and the rood screen which spans the chancel arch; Swanvale Halt's was put in in the 1920s, after the intervention of World War One. The reservation of the Blessed Sacrament must have come a bit later, and I expect there were probably hanging sanctuary lights which have since been done away with. The church has some rather nice stained glass windows of saints (including Our Lady) installed in the 1880s which indicates some quite considerable Catholic influence in Bramley at that time, too. Of course I haven't related these fittings to the history of the parish about which I know next to nothing: what I saw on Thursday is nothing more than a hint of an interesting past. I suspect that the mild Catholicism of Swanvale Halt (more mild than its rector's!) now stands out because it is the remaining rock left high above a receding tide, and some of the other churches around were probably at one time little different.
Posted by WeepingCross at 20:18