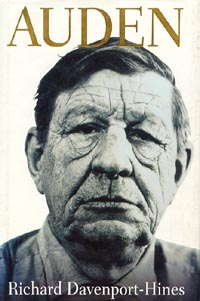 I’ve just finished reading Richard Davenport-Hines’s 1995 biography of WH Auden. D-H is a wonderfully fluent and involved writer and his book on Gothic (subtitled ‘Four Hundred Years of Excess,Horror, Evil, and Ruin’) is still, I believe, the best thing written on the subject. I enjoyed the Auden book though it is, I understand, not without its omissions and flaws. It struck me that this kind of literary biography is virtually impossible now, not only because we write so little down and communicate electronically when at one time it would have been done by letter, but because I think times have changed and behaviour has changed. There was a whole class of twentieth-century intellectuals who were constantly reaching judgements and conclusions about one another, and gossiping to each other about them in those letters and documents; a lot of this book rests on that kind of gossip, in the form of Auden’s friends’ confident opinions about him and his about them. I’m not sure we do this in the same way: certainly I don’t. This may be something to do with the post-modern collapse of grand narratives. Auden, for instance, comes across as full of insights and interesting opinions, but they come from a series of fixed beliefs, conclusions and attitudes which he contracted fairly early on and then used to analyse the world, and people, around him. Sometimes they hit the target; and quite often they didn’t. Sometimes they read terribly sententiously but on examining them you wonder what they’re actually about. Do we really do this any more?

Posted by WeepingCross at 22:05 No comments: Links to this post

Glimpses of the Presence

Friends of mine live in North Berwick. I was there last week and one evening went out and sat on the beach to watch the sun set. For some strange reason I was struck by the presence of God, a very quiet, thankful, but ecstatic experience. ‘Thank you for being here, how kind of you’, I felt constrained to say.


I looked out at the Bass Rock across the Firth, where sixteen or so centuries ago St Baldred had founded his monastery clinging to the cliffs. The Dark Age saints are often somewhat grim-set, granite-like presences in Christian history. What was it they experienced, all those years past, in between fishing and catching the occasional gannet which must have occupied so much of their time? Did it comprise – elation? Did God seem to them the way he does to me? 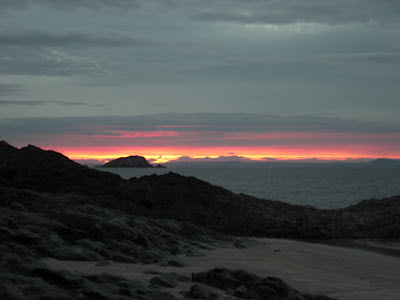 Posted by WeepingCross at 22:03 No comments: Links to this post

Returning to the Church 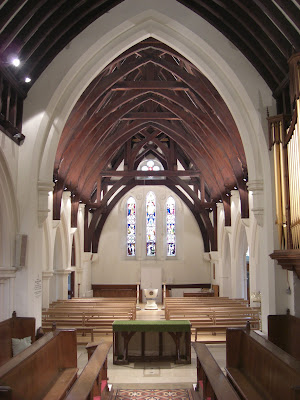 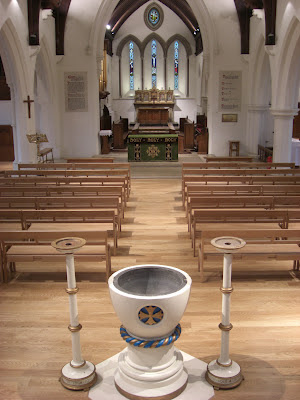 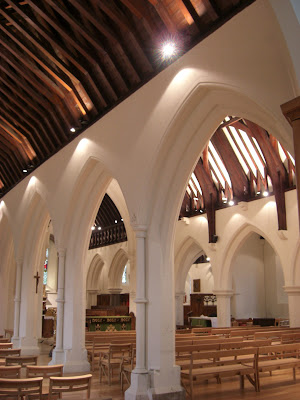 The Feast of the Magdalene, July 22nd, marked the day the congregation of Swanvale Halt church re-took possession of the church building. Everything came together wonderfully last week, the lighting, furniture and cleaners all arriving absolutely on time. Everybody was very complimentary – at least, everyone who spoke to me was – and we had celebratory cake and champagne afterwards. ‘Are you pleased?’ asked a member of the Roman Catholic congregation. ‘After all, you’re the most important person to please’, which I thought was rather an odd statement. That I am ‘pleased’ matters least of all, really; it isn’t about my preferences.
We ceremonially re-filled the font, with various people pouring in buckets of water and the font then being blessed; the choir sang Stanford’s Te Deum; and we used the old Victorian altar frontal which will be packed off to Janet the Goth seamstress to be repaired so it can make an appearance a bit more often in the future.


It was all lovely, and I’m now on holiday so the relief is unbounded. But fiddling around with buildings is the easy bit of it all, really. Bringing some spiritual dividend out of the changes will be a far longer-term job. I hope we’ve done the right thing.
Posted by WeepingCross at 22:01 1 comment: Links to this post

Last Friday it was my grandmother’s funeral. She’d only been a few weeks off her 100th birthday, but a gallstone and the ensuing infection made sure she didn’t quite make it.


We waited, me, my mum, sister and brother-in-law, mum’s cousins and a couple of Nan’s neighbours, in the supermarket car park just outside her flat for the hearse to arrive. It wove a circuitous route through Parkstone where she lived longest. The atmosphere was rather different from the horrible strain of my Dad’s funeral only 6 months ago, and so I caught more of people’s reactions as the hearse went past. Mostly people don’t do anything, beyond looking very obviously uncomfortable; a good few don’t notice (perhaps they don’t notice anything going on around them, some people don’t), and I only saw one individual who actually made any positive response to the presence of the dead. He was a middle-aged man doing some work on a house, and paused on the scaffolding as we drove past, and saluted. I thought that was rather lovely. Of course he had no idea whose body was being transported along the street, but that shouldn’t matter. We ought to acknowledge the passage of one of our brothers and sisters, as a recognition of our common humanity. It’s a shame we don’t know how anymore.
Posted by WeepingCross at 21:57 1 comment: Links to this post

A while ago I had reason to look up a prayer to St Michael for protection against evil on behalf of a parishioner. There is quite a well-known one from Roman Catholic sources and whose authorship is ascribed to Pope Leo XIII. But it has an interesting story behind it, involving a gradual inflation of the drama allegedly surrounding its composition. Originally it was simply promulgated by the Pope without comment. Then in the 1940s one of Leo’s secretaries claimed the prayer originated from a vision the Pope underwent at Mass one morning, in which the Church’s spiritual enemies were revealed to him. In its most developed form, the story has Leo collapsing, passing out and remaining insensible for days before coming round and revealing the details of his vision. That, of course, is complete fiction.


Then a few days later a former parishioner from Lamford sent me an email. ‘Greetings from the Shrine of Our Lady of Yankalilla!’ he said. Our Lady of where? Yankalilla turns out to be in New South Wales. In 1995 a damp patch mysteriously appeared on the wall of a very unremarkable Anglican church in this unremarkable Australian town, and, with some imagination, you can see how it resembles the traditional pieta image of Mary holding the dead body of Jesus. And so up popped the Shrine – endorsed by the Anglican bishop of The Murray, complete with a holy well and all the accoutrements of an albeit relatively minor sacred place.
In both these examples you can see very old patterns re-emerging, stories escalating and ideas gathering as imagination gets to work and tales get re-told. I can’t exactly forget these patterns as I re-tell the older stories in the Biblical texts, especially to the children at school. We’re careful to couch them in terms of being stories, and even fairly small children are aware that some stories are real and some aren’t. I wonder what exactly they think about the Bible’s, though, and how easily they distinguish between the categories.
Posted by WeepingCross at 21:55 No comments: Links to this post

'Matilda', wrote Hilaire Belloc, 'told such dreadful lies/It made one gasp and stretch one's eyes'. I shouldn't be surprised by anything in the lives of Mad Trevor and his occasional chum Mad Terry, the demon-smeller and Charismatic Christian, but they still catch me out. They have resumed their musical ambitions and I was asked to go round to Terry's house, an old cottage in the village, or part of one, to re-bless them for their plans. I arrived, as I had on a previous occasion, to find Terry's landlord and landlady there to sign his new lease. 'You were here last time we visited', said the lady. 'What a coincidence!' 'Isn't it,' I agreed. 'Oh, we always have a blessing when we sign a new contract', put in Terry. Do we? News to me. That wasn't what I'd been asked for. He then pointed to me and told his landlady, 'This man's one of the ones who've been praying for you, that's why you're better, thanks to Jesus!' I wasn't, I had not the faintest idea that anything was wrong with her having only met her once and never given her a second thought since then. It was very clear the owners wanted Terry out of their house and were reluctantly signing another six-month lease and taking the property back into their possession after that; the lady began talking about that, then indicated me and said, 'But you won't want to talk about that with your friend here'. 'James knows all about the situation', Terry assured her. No I didn't, I didn't know a single thing.

Three blatant lies in five minutes implicating me was impressive going. Later on Terry ascribed the failure of his and Trevor's earlier efforts, and a similar blessing ceremony, due to the presence at the time of a couple who turned out to be 'living in sin'. Isn't Christianity wonderful. The falsehoods seem to trip off this particular Christian's tongue with such facility I doubt he's even aware of them.
Posted by WeepingCross at 13:43 2 comments: Links to this post

Years ago during a particularly abortive holiday with Dr Bones involving a broken thumb and spending far too much of it in the boat moored only yards from where we'd started and trying to hide whenever anyone went along the towpath, we visited the Watts Gallery. I think it was then, anyway. We had a very nice afternoon tea and sumptuous cake in the tea room. The gallery itself had, well, let's say 'a charm of its own', involving not looking as though anything had changed since Watts's own day. That didn't mean that it looked like it had done in 1904, only that nothing had been done to it since then. It infused a glacial chill even on a warm summer's day, and in a black jacket one avoided getting into contact with the walls in case too much dust and, in extreme cases, paint came off.

The gallery has now been gloriously restored and a couple of weeks ago I was fortunate enough to be invited on a tour. Now it really does look as it may have done when originally set up. It's become a fantastic, luscious space, if you don't mind heavy Victoriana with a topping of Art Nouveau.

Not content with the £2.5M this has cost, the Trust has even more ambitious plans to buy Watts's house and incorporate that into the scheme as well. It's very exciting.

I hadn't realised how Watts made his fantastic fortune doing society portraits which he hated, but which paid him enough to produce the strange allegorical works he actually thought were his important work, and to build the gallery to put them in (because nobody was going to buy them).

This raises the question of whether he actually warrants such extravagance. Strictly speaking, probably not. Artistically he probably should have stayed a brilliant portrait painter - but then he wouldn't have been as interesting.
Posted by WeepingCross at 21:22 1 comment: Links to this post