I don't know why I think of the grumpy medieval lady I bought a few weeks ago as 'Giulia', but she has given a bit of focus to the messy and unused area to the southeast of the house. There's a steep rise here because the house is cut into the hillside; to the left is the enclosure where my predecessor kept ducks. I've popped Giulia on the plinth of a staddle stone which sat pointlessly in the former scullery area within the trellis which was the duck run, and taken down some of the fencing so you can go right round out of the back garden, past the statue and out to the front. What I need to do is find a nice climbing plant which can cover up the trellis and fence and screen Giulia off in her own discrete area. 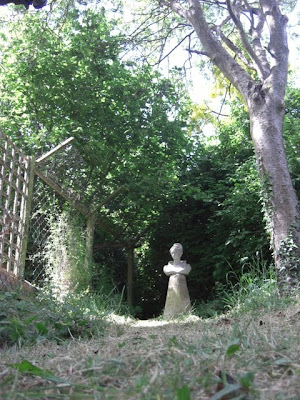 Posted by WeepingCross at 18:57 2 comments: Links to this post

Goth Walk XXIII: Down the Well

On Saturday I had the privilege of taking the London Goth Meetup Group on another history walk around the capital, this time looking at wells and spas. I shall be in a quandary about the next one; I've exhausted all the subjects I can do without looking it all up first ... We were able to visit the well at Sadlers Wells theatre (much to the bemusement of the staff) and at least squint through a window at the Clerk's Well in Farringdon Lane, but understandably all the rest are gone with the exception of the rather splendid Gothic drinking fountain in Lincoln's Inn Fields which finished the walk off. Despite the forecast of 'heavy showers with the possibilty of hail', the weather was perfect. Thanks to Costume Queen for the photo. 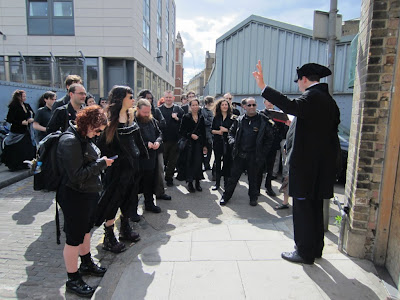 Posted by WeepingCross at 18:36 No comments: Links to this post

Well, this breaks the sequence of child-friendly movies fairly comprehensively. The Town Hall in Hornington shows films every few weeks and this was my first visit; it has something of the feel of an old-time picture house, with space for only about 150people. Friendly, but I felt a bit consciously the need not to block the view of whoever was behind me.

A triumph of style, certainly; a dripping shank of Grand Guignol - or perhaps Petit Guignol, because while there are a number of moments that make you wince, they are small, little wounds horribly inflicted. But though the damage seems nastily realistic, you're never sure how much takes place in the lead character's disintegrating mind. You're never sure, in fact, right to the end, and the sense of disconnection means that nobody in the story is much of a real character, and nothing they do cuts to the heart, so to speak.

But the style! There is barely a scene, apart from those set outside, when a mirror is not present, and a significant proportion of the time we see Nina reflected in a mirror rather than directly, signifying double identities (the Black and White Swan Queens) and the separation of appearance and reality. Again, for much of the time the camera follows very close behind her, generating claustrophobia and disorientation and putting the viewer in a very disagreeable, implicated position. On the production level it's a huge achievement.

While searching for pictures to accompany this post I found these equally striking poster images, which are both Deco in their style and Gothic in their extremity, so meet with approval on all sorts of levels. 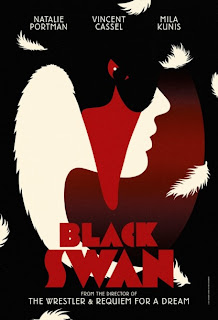 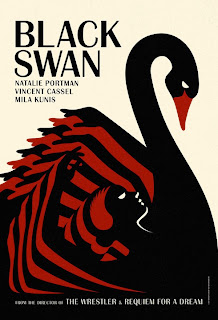 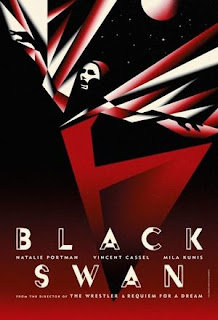 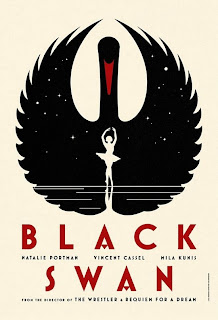 Posted by WeepingCross at 18:14 No comments: Links to this post

Madness in the Methodism

We sometimes wonder whether mad people design Gothic buildings, or whether designing Gothic buildings turns architects mad. Driving through the Isle of Portland yesterday I came across the Methodist Chapel in Easton, which Pevsner describes as 'fanciful' but I would argue 'completely demented' is more appropriate. 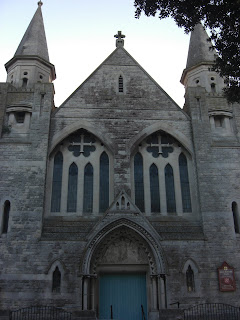 Round the side there's a row of practically insane windows: 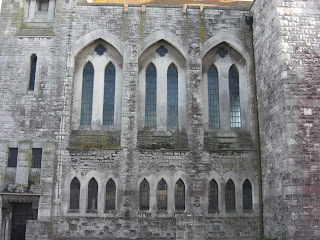 And then there's the screaming doorway: 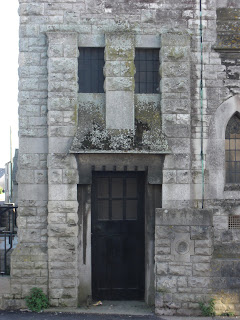 Posted by WeepingCross at 23:26 No comments: Links to this post

Back to the Future

It's very inconvenient having 27th December as the feast day of your patron saint, so we have shifted our Patronal Festival to the Sunday closest to the feast of St John before the Latin Gate, which is much more user-friendly. I thought we might have Solemn Evensong & Benediction to mark the occasion. There is only one hymn I can find in honour of St John, which is 'Word Supreme Before Creation', a slightly weird piece by Blessed John Keble, so I wrote another one, 'John, Belov'd disciple, pray' to the medieval tune 'L'Homme Armée'. It took a lot of fiddling around with the rhyming scheme, I can tell you. A choir was assembled and began rehearsing. As always as the time drew nearer my feet got colder and colder.

I shouldn't have worried. The choir were superb, and our head server wielded the thurible with applomb having not done it for heaven-knows-how-long. Col the other server had never handled a set of Orthodox hand-bells, not surprising as nobody from Swanvale Halt church has, I think, but did that splendidly too. We had fifty or so people, half of whom were virtually in tears by the end - 'not been to a service like that for 30/40/50 years' was the most common category of comment. I said goodbye to everyone, took off my cassock and scooted off to Tanz Macabre.

It's strange how this, once upon a time the great evangelistic event in the Anglo-Catholic movement, has fallen out of the repertoire almost completely. I've always found Benediction, whether small, quiet and devotional or grand and impressive, profoundly moving and I can't be the only one. I also wonder whether we neglect the forms of devotion preferred by older people at our peril; they are the ones who generate the devotion of the young, it doesn't come out of nowhere. 'Same again next month?' asked one of the congregaton. I doubt it, but it deserves to be part of the mix.
Posted by WeepingCross at 22:57 No comments: Links to this post 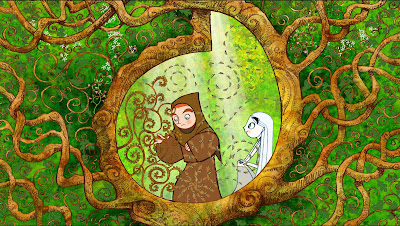 It's somewhat worrying that I've only mentioned two films so far, both of them children's animated features, but there you go. The Secret of Kells is, unsurprisingly, a fantasy about the writing of the Book of Kells, the astonishing eighth-century manuscript Gospel Book now in the British Museum. 12-year-old Brendan is a novice at the Abbey of Kells and nephew of Abbot Cellach. When the famed manuscript illuminator Brother Aidan arrives from Iona, fleeing the Vikings, Brendan is captivated into assisting him, much to the fury of Cellach who insists it's much more important to complete the Abbey's great walls so that the monks and villagers will be protected from Viking raiders. Brendan, befriended by the wood-fairy Aisling, has to decide where his future lies and brave the dangers that choice entails.

The animation is extremely beautiful and accomplished, obviously inspired by the swirling, fractal (and slightly mad) patterns and abstractions of the Book of Kells itself: visually, the film is incredible, especially in the set-pieces including Brendan and Aisling's exploration of the forest, Brendan's battle with the snake god Crom Cruach, and the Viking attack on the Abbey which is actually harrowing. It's very stylised, but as is often the case this stylisation makes the sense of reality more vivid. The story is as slender as you could imagine, but the dazzling visuals mean that doesn't matter. The film wears the Christian context very lightly - the Book is never even stated to be a copy of the Gospels - but the Abbey is clearly Christian with its crosses and plainchant, and Abbot Cellach, from appearing a stereotyped, authoritarian cleric at the start, emerges as a self-sacrificing, responsible leader who suffers for the sake of the people in his care. When he's lying on the burning ground of the Abbey with an arrow in his shoulder and a sword wound in his back and Brother Tang tells him, 'You are the Abbot of Kells. You must stand up', it's rather moving. Despite, or perhaps because of, the stylisation, The Secret of Kells gives you some sense of why the Dark Ages were called that: the impression of the Abbey being an island of civilisation surrounded by the hostile or merely wild world comes over beautifully.

Quite aside from that, there's a spiritual debate embedded in the film, though very sotto voce. Cellach's model for the spiritual life is to defend it against evil by constructing protective walls; Brother Aidan insists that the Book 'which will give the people hope' has to be taken out into the world to do its work. Naturally we need both on different occasions, the defensive and the defenceless, the wary and the hopeful. It isn't often that a children's animated movie can make one think along lines like that.
Posted by WeepingCross at 14:12 No comments: Links to this post