Last year I went with the old people's outing to Worthing, and I did the same yesterday. I think I've exhausted the possibilities of the town, now, I have to say. Anyway.

I went to the Museum. You're not supposed to take photographs in the museum, I know, but this bit of the costume display was irrestistible (though you may have to squint to see the Tudor-style woodwork properly): 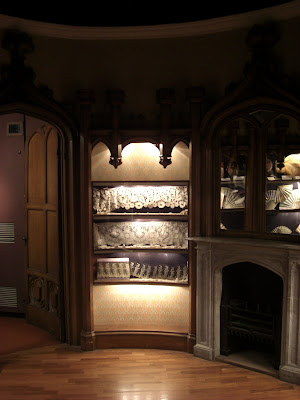 And if you look carefully at this case of jet Victorian mourning jewellery, you'll see that the brooch in the middle is in the form of a little ruined Gothic arch ... 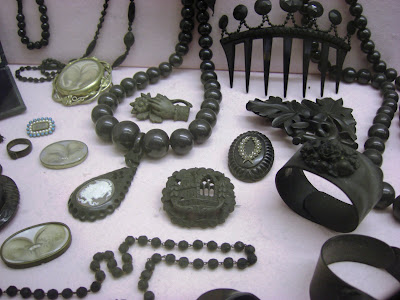 Posted by WeepingCross at 19:40 No comments: Links to this post 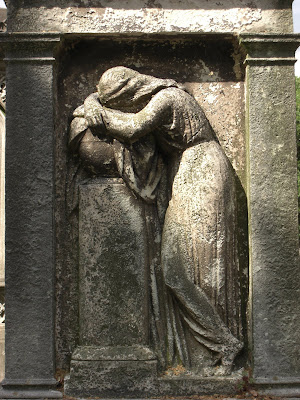 A couple of weeks ago was the Kensal Green Cemetery Open Day. I'd never been to Kensal Green, and it's usually treated as an informal get-together for parts of the London Goth community (my friend Ms Sandells had set up her jewellery stall among the other stallholders next to the Anglican chapel. The monuments were absolutely gorgeous; Kensal Green is the British cemetery that manages to get closest to the over-the-top grandeur of the European necropolises such as the Pere Lachaise. Some of the tombs are like little cathedrals complete with flying buttresses and gargoyles, while at the other end of the spectrum are modern family mausolea which are best described as 'chalets for the dead'. I went down to the catacombs, whose most disturbing elements are the sense of decay - rotting leather and lead, rust, chemical reaction continuing around you - and the weird realisation that all the little chambers for coffins, or lacunae, are privately owned and so not even the cemetery company has keys - anything could be in them, the ideal setting for all sorts of mystery stories. There was even a man in a top hat offering rides on a penny-farthing: I always thought 'Goth on a bike' was an oath, and that irrestistibly came to mind. Not sure what exactly he was doing there, but as a friend of mine said, 'Where else can you ride a penny-farthing around and not look out of place?'

Sadly memories of the day are a little soured by the discovery that the young woman going round asking Goths questions and taking photographs with the justification that she was 'researching subcultures' turned out to be an aspirant journalist whose piece about the Goths at Kensal Green for an online magazine was a snide, nasty catalogue of insults (and misquoted me). Why do such people bother? 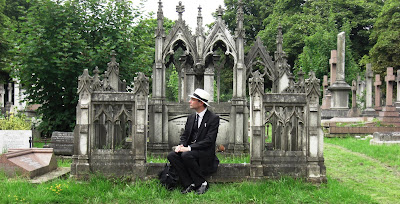 Posted by WeepingCross at 19:30 No comments: Links to this post

We had a derisory turnout at 8am this morning, so it was nice to have a relatively full church at 10. Then we had even more for a baptism at 12, of the great-granddaughter of a member of the congregation. Present among them were her sons (and therefore the baby's great-uncles) who run the cycle shop where I get my bike seen to, the ladies from the bakery in the village where I get my iced buns and bread for our ex-nun sacristan who is confined to barracks at present with knee trouble, and the couple getting married in church next month who turned out to be former neighbours of the baby's dad. Isn't that lovely?
Posted by WeepingCross at 20:07 No comments: Links to this post

Miss Vale of the LGMG organised a trip to the Globe on Saturday to see the production of Christopher Marlowe's play Doctor Faustus. It was an energetic production, done with great inventiveness and enthusiasm, but as some of the critics have said, strangely unaffecting. Perhaps the problem is with the play itself, some suggest: it's just not really that good. There certainly does seem to be something hollow at the heart of it, and you wonder how far Marlowe, the great sceptic, took it seriously at all. Then again, perhaps the problem is with us. 'You can imagine how terrifying that must have been to people at the time', Miss Vale commented afterwards - not that Marlowe seems to have been very terrified - but that is perhaps the difficulty. What terrors do ideas like 'damnation', 'selling your soul to the devil' and so on actually have for modern human beings? It isn't clear from the play what Faustus does that is actually so very bad, apart from denying God; this is so vastly remote from modern experience that it needs detailed unpacking before you even begin to appreciate what it might be about, and the play doesn't give you that: it assumes you already know. It's a piece from a lost world, and performing it straight leaves it lying on the floor.
Posted by WeepingCross at 20:18 1 comment: Links to this post

It's been over a month since I've added anything here, shameful really. It was partly because something went awry with Blogger and I couldn't sign in, which eventually sapped my will to keep trying. Then when vaguely interesting things happened they weren't interesting enough to overcome my inertia or I was too busy until the moment, and the vividness such as it was, had passed.

Today I was at Widelake House to take the monthly communion service for the increasingly daft, and before we began went to see a former member of our congregation who is resident there and who I'd been told wasn't doing well. Pat is 98. Until the later part of last year she lived alone in a development of old people's flats until she managed to fall down a flight of stairs. How she escaped completely beating herself to pieces is anyone's guess, but despite not doing herself any dramatic injuries the process of recuperation took an agonising time, stretched out longer than necessary because the powers that be insisted she shouldn't go back home where she could potentially fall down the stairs again. The only place that could take her was Widelake - not an ideal location because it's largely for dementia sufferers and while Pat is a bit confused sometimes she doesn't really fall into that bracket. Still, here she's been since about March and no alternative has arisen.

I went to her room to find it darkened, and Pat in bed, hardly speaking. She's stopped eating and engaging with the world, or that somewhat unsatisfactory corner of the world that is Widelake House. 'Everything is horrible', she said, eyes still closed. 'I want to stop'. I didn't have a great deal of time, so I sympathised, prayed a little while, held her hand and told her to leave it to God. Pat has always been a cheerful person and this wasn't pleasant at all.

What am I supposed to do here? I suppose we have an instinct to try and chivvy people along when they're feeling low, but I've never felt attitudinally very inclined to do that, and on the occasions when it occurs to me to do so the hackneyed clichés die on my lips as I think of them. It seems somehow dishonest. To cope in extreme old age with the removal of things we enjoy, to face loss with cheer, requires a great deal of spiritual strength which you can't just suddenly acquire; and is depression an unreasonable response? All we have to weigh against these losses is the hope of the resurrection. Perhaps that's what those contentless but gentle words 'it'll be all right' hint at. I know that someone saying them to me has been a comfort even when it is by no means clear that it will indeed be all right. I will go back to Pat at some point, but I don't think my job is to try to reconcile her to the pains of this life, but to point beyond them.
Posted by WeepingCross at 19:06 3 comments: Links to this post