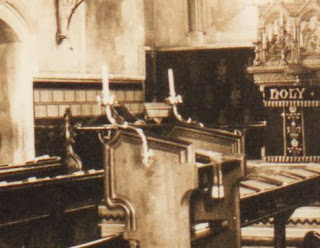 This photograph involves the potential unearthing of a mystery. I only quite recently realised that the walls of the sanctuary of the church, around the old high altar which is now only used a couple of times a year, are lined in a spongy material painted white. At first I couldn't work out what this was in aid of. Then I took a closer look at an old postcard of the church interior, dating from about 1910, which had been sent to us from Germany of all places a couple of years ago. This shows that the walls either side of the chancel (presumably the unseen south wall would be identical to the north) were lined with decorative tiles. The east wall, behind the altar, is also decorated with a dark ground and a lighter repeated pattern, although you can't tell from the photograph whether this is tiling, paintwork or possibly fabric. I don't think it can be the last, as the decoration runs right up to the stone rail and there's nothing to hang fabric from. Later on this wall was covered in curtain which hung from a brass rail put there for the purpose. 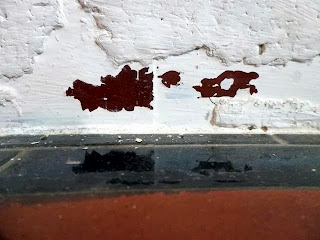 Then yesterday we had a scout round the chancel and discovered a tiny patch along the floor where the foam board, whatever it is, has come away and the gap painted over with lashings of white emulsion. Some of the paint has flaked revealing dark reddish-brown ceramic. It flakes off quite easily, actually, with a bit of encouragement.

This means the original Victorian tiles are presumably still there behind the foamboard. When and why they were covered up is anyone's guess. Part of me would dearly like to hack all the wretched foam off the walls and uncover the Victorian splendour again - an urge only just restrained by the thought that the tiles might not be quite so splendid in reality as in my imagination. Not only may time and several decades of glued-on foamboard not been kind to them, but perhaps there may have been a perfectly good reason for their obscuration in the first place. It is, however, so very, very tempting. I have a Stanley knife in my toolbox.
Posted by WeepingCross at 20:22 1 comment: 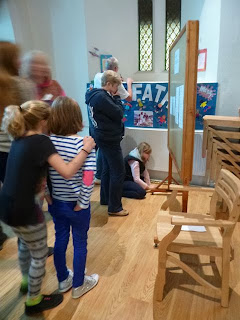 Messy Church has been going at Swanvale Halt for over four years now and has built up its own clientele, or congregation as we are supposed to think of it. We always tell ourselves that, in theory, for some people who come, children and adults, it's the only faith and worship input they have. Not everyone: plenty of our regulars are pretty embedded members of the worshipping community, while others belong to other churches around the area. Nevertheless, the statement that for some people Messy Church is 'church' does hold true.

We had a Messy Church gathering yesterday. The theme was 'good neighbours' and one of the helpers devised a quiz (or two, one for adults and one for children) asking them to pair up the different sets of 'neighbours' mentioned in the Bible.

After everyone else had gone into the church hall for tea and cake and I was clearing up, I found one young mum sat on her own pondering the lists. 'I recognise some of the names', she said. It turned out she didn't have a Church background at all, but had been reading Bible stories to her daughter, who is 6. 'I ought to know more about them', she went on, 'But there are so many names and you lose track'. I draw no particular conclusions from this, only that here is one person who is obviously interested and thoughtful, and equally obviously doesn't know very much about Christianity, but is there at all because her daughter comes and does crafts, sings a song and eats cake.

Posted by WeepingCross at 21:37 No comments:

It's been more than a month since I last updated the blog. There seems not to have been the time, and I haven't had the energy despite there having been some things probably as much worth saying as anything else I've posted here. But there it is.

I won't add anything very pious this time. Instead here is a picture of the grotto as completed last week, first victory in my ludicrous campaign to refashion the garden in 18th-century fashion. I should Rococo, I keep saying to myself. 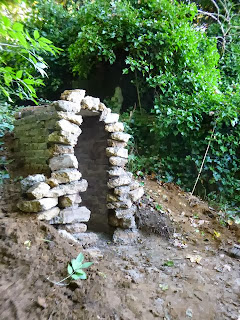 I'm rather pleased with this. It looks pretty much as I envisaged, once I worked out I couldn't construct the whole thing of rubble; instead the main part is brick, with sandstone slabs for the roof and a rubble arch to frame the opening and lend an irregular appearance. Eventually the grass and weeds will re-colonise the soil around (and on top) of the building and it'll look much more natural. 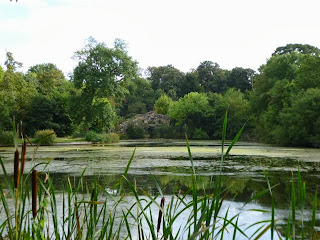 Sadder is the state of the old grotto at Wanstead Park in east London. I was enticed by reports and relatively recent photos of this structure, and we made a journey out East and then traipsed around the remains of the ornamental canals and pools - which takes rather longer than we anticipated. The grotto is just a wreck of its former self, and you can't even get to it. It's fenced off by a high spiked steel fence. Not too long ago it was far more tidy, but now the weeds and brambles fill it.