The Right Kind of Magnolia

Three whole years ago, over my first winter in Swanvale Halt, the snow brought down the lovely magnolia tree planted by my predecessor-but-three. The stump has remained and the corner of the front garden where the tree stood has become progressively more disgusting. Today I finally got around to buying a new infant magnolia and planted it out. 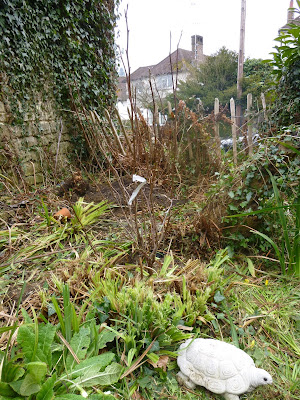 It's there, in the middle, with the tag around it. I hope my nan's concrete tortoise will do a better job looking after it than he did of some other recent additions to the garden. Trouble is, he moves even slower than the slugs.﻿
Posted by WeepingCross at 21:28 No comments: Links to this post

This Easter Day I wore my old gold set for both the 5.45am and the 10am. I don't believe I've posted about it before, so to celebrate the festal season (and my post-Easter break), here it is: 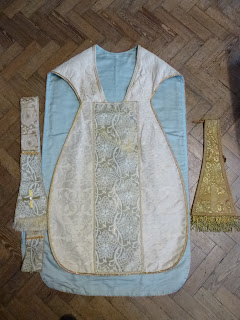 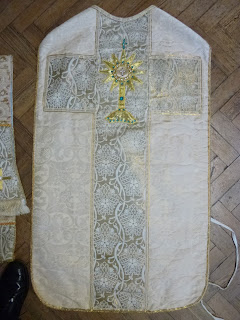 On the right-hand photograph you can see the embroidered monstrance which is highlighted with blue and white jewels. The orphreys are woven with gold fibre and the edging is in gold as well - though it's not actually particularly bold or showy, it just catches the light.
The set came from the now-redundant church of St Margaret, Upper Norwood, more details of which can be found here. At least I think it's only redundant, it may actually have been demolished. It came to me via the good offices of Church Antiques at Walton on Thames, as has quite a bit of my personal stuff.
You will notice that the maniple is not of the same design; when I bought the set it didn't have a maniple so I got that separately from eBay. You can imagine how spectacular the set this once belonged to must have been: 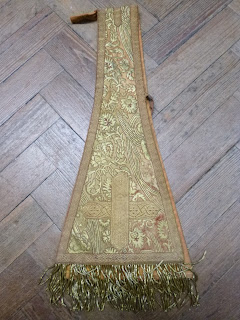 Roman﻿ chasubles have a lot of strain put on the shoulders which is why the silk tends to go there first. My set it no exception and I've had to do quite a bit of repair work as you can see in this photo: 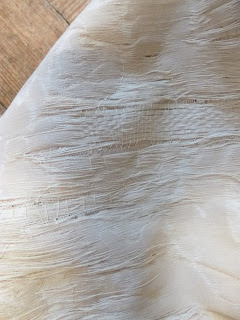 From a distance it looks fine, but although I use the stole quite a bit for special occasions, notably weddings, I don't put the set to too much work. So I was twitching a bit when I came back into the vestry to get ready for the 10am only to see the Roman Catholic congregation's latest stand-in priest, Fr Stan from Poland, breeze in wearing it, sling it off his shoulders and plonk it on the table. The one they'd brought along for him was too small, so he wore mine. There's ecumenism for you.
﻿
Posted by WeepingCross at 21:39 No comments: Links to this post

A Walk Around Wotton House

Not too far from Guildford is Wotton House, once the home of the Evelyn family which included the 17th-century diarist, politician and scientist John Evelyn. I went for a post-Easter walk around the footpaths leading past the house today, intrigued by reports of its follies and landscape features and not sure whether it was possible to glimpse any from the walks. It wasn't, though behind one of the estate cottages on the drive to the house it was possible to see a long brick wall terminated by a pair of little Gothick belvederes, if such you can call them: 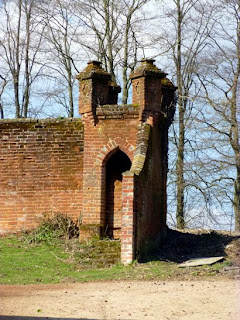 The outside of the house, and the urns in the drive, sport a charming range of faces, grotesques and gryphons: 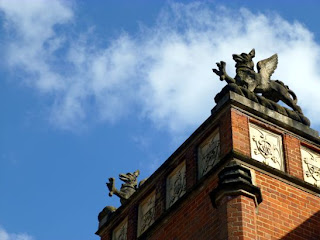 I thought it would be a shame to go without making any effort to see the garden features, so without expecting anything very much I asked at the hotel reception whether that might be possible. 'Of course', said the girl on the desk much to my surprise, 'Just go through the French doors along to the right and wander around the garden', so I did. There is a Temple erected by John Evelyn himself and his brother George, adorned with a variety of now-rather damaged statues, none the worse for being a bit battered: 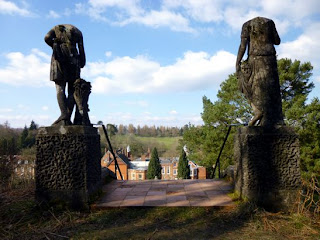 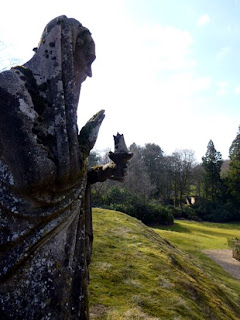 Meanwhile, just to the west of the house was a delightful Grotto: 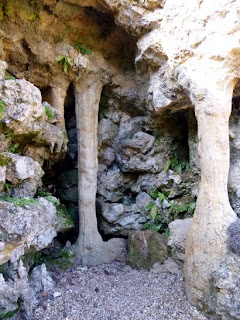 Back inside the house, I passed this luridly lit Gothic hallway. It made me reflect how it might have been all very well in the 19th century, had you enough money, to build a house that looked like a cross between a church and a stage set for a Wagner opera, smothered with marble and encaustic tiles, but it must have been absolutely exhausting to live with. Wotton House actually isn't like that - not another Tyntesfield - as this is the only Gothic Revival chunk I saw.﻿ 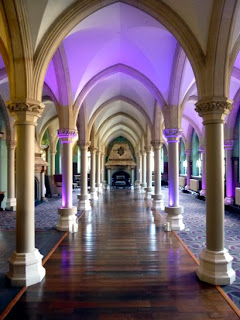 Perched on the hill north of the house is this cottage complete with a belltower, which reminded me of Portmeirion. Crying out to become a Landmark holiday let, it is: 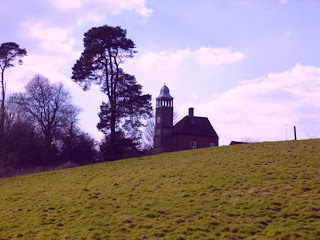 And the last call was at the delightful, albeit locked, church to the north on the other side of the Dorking road. I found this little cherub on a tombstone, imprisoned behind rails: Wotton is very much not a Gothic Garden - it's one of those places where there are elements of what will definitely become Gothic Gardening some decades later, but there is no sense of an interaction with the landscape which binds the individual elements together in gloomful exuberance. There is, however, a very amusing collection of features which I was very glad to have the chance to see.
﻿
Posted by WeepingCross at 23:24 1 comment: Links to this post

Margaret was a woman for whom 'faithfulness' was an inadequate word. She was born in Swanvale Halt but became a nun (to the disapproval of the then Rector who said her responsibility was to stay at home and look after her mother) and some years later had to leave her order after discovering that the climate in Africa (its mission field) didn't agree with her. She carried on nursing, and being sacristan to a series of churches, both Anglican and Roman Catholic. When I arrived in Swanvale Halt, Margaret was already disabled, making her way slowly about the village with the aid of her trolley, usually packed with a mixture of ecclesiastical bits and pieces and baking necessaries. She carried on making cakes for people even when she could barely move around the kitchen. She'd had an operation some years before to fuse some spinal vertebrae, and desperately needed another, but spent a year and more waiting for leg ulcers and other problems to clear up. By late 2011 it was all arranged, but at the last minute a blood test revealed some anomalous results and Margaret was sent home again. Just after Christmas she suffered a perforated bowel almost certainly because of the colossal amount of painkillers she was taking. I spent a night by her bedside in hospital reading the Gospel of St John (her favourite) as it seemed like it would be her last, but no: there remained over a year of immense pain, frustration, going home and back into hospital again, before finally she succumbed to the pain (which was never satisfactorily diagnosed) and medication and died a couple of weeks ago.

Zadie's case was very different and I can say less about her. She was a friend, born in the opposite sex to the one she ended in, who was clearly very, very mixed up; every suggestion you ever made about how her life might be improved was pushed away with elaborate and very convincing explanations, social and medical, of why it wouldn't. The mental health 'system' swung into its usual state of inaction and buck-passing, and left her floundering repeatedly when what she really needed was to be hospitalised and her life run for her until she was able to run it for herself. She alienated people on a regular basis, flung implausible accusations at former friends, and built a narrative of marginalisation and misery which, however false and self-defeating it may have been, was indeed founded on great physical and emotional pain. In the end the Enemy got the better of her and she ended her life a few days ago.

Life made the bodies and minds of both Margaret and Zadie a battleground in ways which most of us don't have to undergo. But that battle is one we are all involved in, to a greater or lesser degree; and how we fight it is largely determined by the weapons life gives us and where we find ourselves along the front line. We have no cause for anything but sorrow, and commend these souls to him that made them.
Posted by WeepingCross at 22:03 No comments: Links to this post 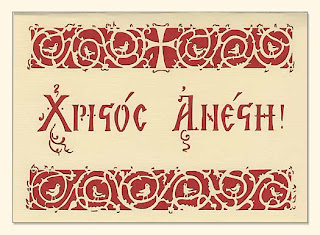 It was very, very cold as I made my way down the hill towards the church at 5.15 on Sunday morning, which, given the arrival of British Summer [sic] Time, was really 4.15. I wasn't expecting such a hard frost - nor was I expecting very many people at the Dawn Mass. I certainly wasn't expecting the twenty hardy souls who attended and said afterwards how they enjoyed it. The nicest comment came later in an email from a new member of the congregation who comes from an evangelical background: 'Thank you so much for the wonderful service this dawn. I hadn't a clue what was going on but came away mightily blessed!' which I think is actually very profound ... We had about 120 people at the 10am eucharist (a 'Family Communion', so biretta and maniple but no incense), including a number of newcomers young and old, and two couples one partner of whom had each come to the Liturgy of the Passion on Good Friday, and brought their others halves along on Easter Day. A lovely, glorious and celebratory day for which everyone had worked very hard and faithfully.
Posted by WeepingCross at 20:57 1 comment: Links to this post