Usually I lose patience with Christians complaining how the modern world is directed infernally via a manual wagon, and how nobody understands them. But I've gibbed at one thing today. For the first time I'm getting draft orders of service for funerals direct from the undertakers' preferred printers rather than working out the running order with the families of the dead and then relinquishing any influence over what happens next. This afternoon the printer sent me a draft with 'Service of Thanksgiving for the Life of X' on the front, and for the first time I am emboldened to challenge it. I very much suspect it isn't the phrase the family themselves have asked for, but that it's the printers' or undertakers' default title for what happens at the crematorium, probably because it will fit all religious traditions.

But it isn't just 'thanksgiving' that happens. All sorts of things are, or may be, going on at a funeral service. From a Christian viewpoint there's the business of 'commending the dead to God'; but even putting that to one side there is loss to be acknowledged, pain to be comforted, and perhaps ambiguous feelings about the 'loved one' that will be bubbling under the surface (I've offered funerals where the congregation has had cause to be very divided in their attitude to the dead person). To take all that and wipe the bland word 'thanksgiving' over it is, even on a humanist reading, a weak, bloodless impoverishment of the truth, a truth which is multifaceted and layered. We are giving thanks, but not only giving thanks.

My suggested amendment of 'thanksgiving and commendation' isn't really much better, but it's something until I can think of an improvement. What it should be is simply a 'Funeral Service', or best of all a Funeral Office, which is what I put in the church service register - the officium proper to a funus, the corpse. But perhaps we are too squeamish to acknowledge what's really going on.
Posted by WeepingCross at 20:23 3 comments: Links to this post

I thought I'd heard a strange scratching in the Vestry. Sure enough when I knocked the steel cover screening off the old fireplace there was an answering scrabbly noise: mice, I thought anxiously. I moved the screen back to find not a mouse but a swift which I scooped up and, with much trouble, got outside where it sat on the ground for a few seconds looking stunned and then flew away.
Posted by WeepingCross at 15:54 No comments: Links to this post

On Saturdays I usually pray through the weekly list of departed members of the Guild of All Souls sent round by the Guild to its members. They are all just names, of course, but acquire a strange, tenuous familiarity as they come up year after year - or at least, the same types of names do.

This morning I was praying through the list as usual and 'Alan Bean, Priest, 2009' came up. I supposed this must be Father Bean who was one of the Cowley Fathers and who, when I was at St Stephen's House, was living in the All Saints convent nursing home and was just about mobile enough to be carted to St John's on the Iffley Road for Mass on Sunday morning. Once in a while that was my job. We were all warned to take special care of Father Bean in case his catheter slipped out en route (but, thankfully, not instructions to put it back in). During the procession to the Altar of Repose on Maundy Thursday one year he was actually set on fire with a candle.

Fr Bean's name rather caught me off guard because I've got used to the Guild of All Souls roll consisting of people I don't know. What image do I have of him? He wasn't always a doddery old monk. What image do I have of the dead generally? It tends to be of rows of grey-faced silent people standing beyond a wall, gradually moving back and fading as more arrive, an image which comes from the Earthsea books and which I've never been able to shake. After 15 years, the Guild's names are removed from the daily prayer list and transferred to the Memorial Book where they remain; but I suppose eventually even that annual remembrance would become unfeasible to maintain. In Swanvale Halt we came to the decision that the list of the dead prayed for would depend on whether there was anyone around who remembered each person, a means of keeping the roll to a reasonable length; as a result the dead settle deeper down as time goes on like layers of sediment, gradually disappearing as new names collect on top of them, until those at the lowest layers only God remembers.

How hazardous and small our lives seem, seen like this. How we perpetually fade, and how little we know about what roles we play in the wider picture. It's a comfort, I suppose, that someone remembers Fr Bean, but his process of fading is well advanced.
Posted by WeepingCross at 15:35 1 comment: Links to this post

Savage Vignettes from the Corscombe Siren 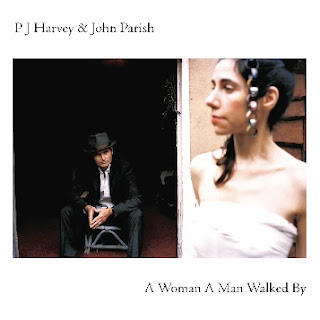 You know I regard Polly Jean Harvey as something close to a divinity come tiptoeing from the Dorset mud. Her latest album, a second collaboration with John Parish after 1996's The Dance Hall at Louse Point, came out last year but I've only just around to listening to it. This is A Woman a Man Walked By. The mood is very different from the eeie, sepia-toned Gothic of White Chalk but the technique is the same: each track is less a narrative, even an excerpt from a narrative, than an insight, a single visionary thought translated into - well, everything from a howl to a shriek to a whisper. And a grin, because there's a streak of mischief and visceral humour running through the whole album. There's a lot of fun here, but, as they've said on Allmusic.com, Harvey and Parish's idea of fun is somewhat different from most people's. A queasy collection of bad dreams. Suits me, though.
Posted by WeepingCross at 21:47 No comments: Links to this post

Last week I visited Petworth. It's an attractive little town with winding streets and a variety of old buildings, and the local economy seems to rely mainly on the antique trade. Or at least it once did. Even though now one shop in every three seems to be an antique shop, until recently there were obviously many more because one of the other two is a closed antique shop. In one of these I discovered this sweet little Gothic barometer- sorry for the poor photo, it was impossible to get any closer through the display case. 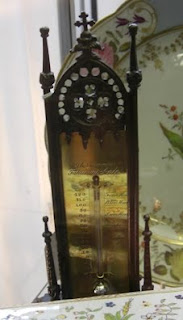 I didn't buy it. Clearly this kind of thing is 'highly collectable' to judge by the three-figure price, and not just into three figures either.
Posted by WeepingCross at 21:41 No comments: Links to this post

This time of year even a neglectful idler like me realises the garden needs attention. The final straw was taking a trip up to the far recesses of the Top Wall and realising that Melpomene was about to vanish beneath a forest of Herb Bennet and Green Alkanet. 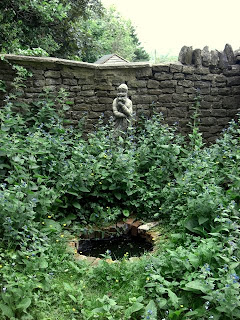 That was easily enough dealt with, and the grasses and weeds around the little pond have now grown in around it, making it look as though it's been there years, which was exactly the effect I was after. Less agreeable was the fact that the water had been colonised by a sort of larvae that looked and acted like vivified gobbets of snot. They made mosquito larvae look cute by comparison. Thankfully a few weeks later and they all seem to have either been eaten, died, or have been converted into whatever flies they were going to become. I'm going to keep the pond covered this winter so I don't have to clean it out!
Posted by WeepingCross at 21:31 No comments: Links to this post

Late last month Dr Bones and I visited the ruins of Waverley Abbey - the day was glorious, like it was when we went there four years ago, only there were more people around, the Dr now had a dog, and her arm wasn't in a sling having broken a thumb. The ruins, of course, are as lovely as ever in the right light. 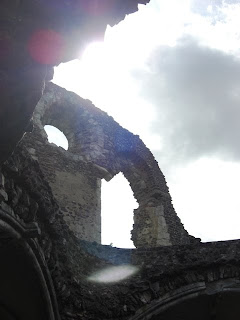 I will probably put some more of these on the website when I get into gear to do anything there!
Posted by WeepingCross at 21:23 No comments: Links to this post

All of One Author

In his reflections on the Cumbrian shootings, The Heresiarch sums his assessment up with what he describes as the apparently callous statement 'shit happens'. Callous, but it makes more sense than most of the woeful commentary which deluged the media after the event. I was pleased that the Cumbrian clergy interviewed on the radio also came up with what amounted to politer versions of the same statement, and refrained from trying to cash in by drawing dubious conclusions. I doubt every pulpit in the country will be as realistic this Sunday.

It was my day off on Thursday and I went for a haircut, did various things around the village, and overheard people's conversations. Nobody mentioned events in Cumbria except a member of the congregation I happened to talk to, and that was because she was born up there and felt a sense of connection. This isn't callousness: it's entirely appropriate. There's no wider lesson, and nothing to be said beyond the otiose 'Isn't it terrible?'. Whatever thoughts we have here, they are low-level and private.

Instead, on Wednesday a local lady from a different church, well-known in the area for voluntary work in a variety of capacities, was knocked down and killed while cycling along the main road through the parish. I didn't know her, but feel a far greater sense of connection with that one random tragic event because I know people who do and can see their distress, and am familiar with where it happened: I also cycle along there quite often.

Were we as God-like as we were intended to be, we would feel the pain of distant others as keenly as those close by. 'All mankind is of one author, and one volume', mused that great Anglican John Donne, 'Any man's death diminisheth me, because I am involved in mankind'. But across the sad globe thousands of tragic deaths usher out of earthly sight souls every bit as worthwhile as us, whose loss to the world is as great, from violence, injustice, or disease. And we don't, can't, pay too much attention to them. It's enough to keep in mind the dead we know something of.

The age-long task of God has been to break down the distinctions we build between one another, to remind us of our common need and childhood. And I see that in the most sane reaction to what happened in Cumbria, not to draw doubtful conclusions, but to think calmly and with regret of those who have died, as the newspapers did with biographies and accounts of their daily lives - worthy ordinary people not far different from the people of Swanvale Halt, or anywhere else. Beyond that, there's not really much to say. Silence is right.
Posted by WeepingCross at 20:32 2 comments: Links to this post