St Augustine's Well was one of the very first holy wells I ever visited, over 25 years ago, and since then I've been back many times. I've seen the retaining wall around the enclosure collapse and be rebuilt, a carved stone seat appear beside the pool, and one of the ancient lime trees leading to the well, the Twelve Apostles, felled.

I returned a couple of days ago. The lower branches of the lime trees were hung with multicoloured ribbons, and there were a number of people around including a family with three young children, but the well is in a very sorry state. It's virtually dry when there should be a foot or more of water, and the stones which line its base and are normally seen through bright, cold spring water are coated with horrible mud. The stream which usually runs down the street and makes Cerne such an attractive place is full of grass and weeds, and the duck pond is a shadow of its usual self. 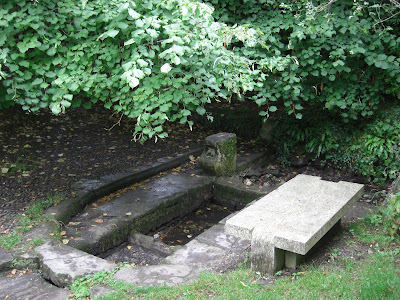 This seems sad, but Cerne has had its rough times before. The little display on the history of the village in the church mentions how there were hopes that the railway was going to come through the Cerne valley in the 1850s, but in the end the Somerset & Dorset line was laid along the Frome Valley and linked Dorchester and Yeovil that way. The coaching trade which was so important to Cerne (you can still spot a number of houses that clearly used to be inns) fell away, and by 1900 the population of the parish had dropped by 50% - an astonishing statistic.
Posted by WeepingCross at 14:02 1 comment: Links to this post

I spent a lovely couple of days in Dorset at the start of this week. Since reading the book Nightmares in the Sky I have become morbidly sensitive to gargoyles, these strange beings that inhabit a world above our heads. Near where my sister lives in Wimborne is this house, which someone has chosen to decorate with a variety of corbel-stop heads - ten of them, to either side of each window. I say 'chosen', because a couple of faces repeat themselves and I imagine they've been bought out of a catalogue of some kind: 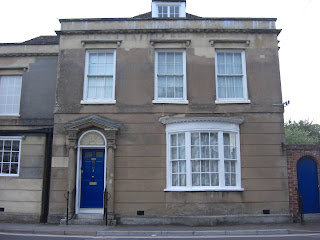 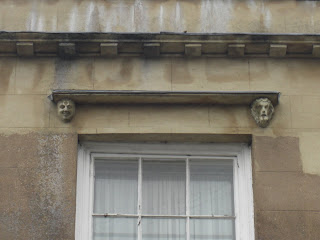 There's nothing fake about the gruesome cow-skull carved on the doorframe, however. 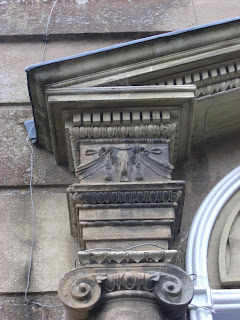 Meanwhile, in all my years of visiting Wimborne Minster, I've never noticed this floriate skull: 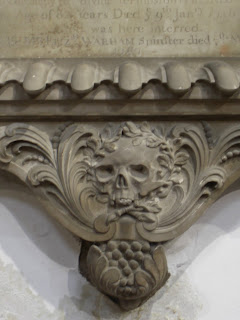 While I've also managed to avoid the Congregational Chapel in the town, which seems uniquely grim and threatening: 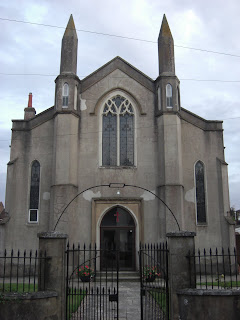 Cerne Abbas Church has a crop of absolutely demented gargoyles, and a very pleasing Gothic chair: 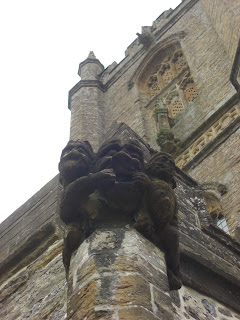 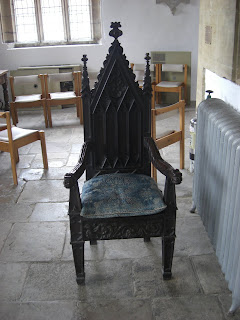 St Osmund's church at Evershot boasts gargoyles which are equally as unhappy as Cerne Abbas's (especially the one which has lost its head but gained a wasps' nest), but one of the houses in the village has a much more benign one: 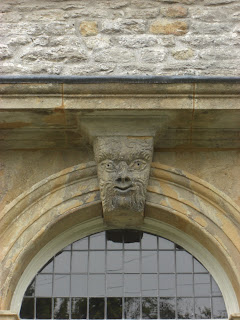 Posted by WeepingCross at 20:52 No comments: Links to this post

Out From Under the Stones

I've always been able to tell people what a pacific, placid church Swanvale Halt's is. Nobody ever criticises anyone else. Well, last night we had the first sidespersons' meeting in three years; sidespeople are officially assistants to the churchwardens and, in most churches, this means getting books ready for services, welcoming people who come through the door, and keeping an eye on anyone who may need help.

I was amazed by the little rancours that have obviously been slumbering for ages! Among them were:

- the accusation that we keep running out of service leaflets. I could only remember this occurring once since I've been at S.H., but people maintained it often happened, including two weeks ago. I thought this was odd as we'd printed the usual 80 service sheets and according to the sidesperson who did the counting there were barely 70 people in the building.

- a discussion about the need to have a table in the entrance area to assemble books and leaflets on. One of the sidespeople described an extraordinary dance around the book trolley she found herself engaging in so as to avoid people coming through the door while simultaneously getting books ready for the next few. 'Well, we used to have a table', said another person, 'I had a row with Miriam Block [my predecessor] about getting rid of it. She said it was divisive'. Another longstanding church member couldn't see what the problem was.

- my favourite memory of the evening: we were going through the sidespeople's rota and the names of the two people who set up for the Taizé service came up. 'They won't do anything else', said one former churchwarden with a tone of barely-suppressed contempt, 'They came once when the services had been changed and found it wasn't Taizé and I asked whether they would help with the service and they wouldn't and left. So they won't do anything else.' It turned out this was during the chap's last stint as churchwarden, and therefore at least eleven years ago. We speak a lot of guff about the Church being 'a family', but how true it is: we nurse tiny grievances over decades, just like real families.

I find myself hugely pleased with this outbreak of minor rankling in the congregation. It's all very well slopping around words like 'love' and 'community', but it means next to nothing without a bit of grit. How can I learn seriously to love the people committed to my charge unless there are bits of us all which aren't entirely loveable?
Posted by WeepingCross at 19:49 1 comment: Links to this post

I threw the Rectory garden open to the parish for a tea party on Sunday and people came and enjoyed themselves (as did one of the dozens of cats that periodically visits). Some even braved the nettles and brambles and wandered up to the top of the garden, having misidentified Melpomene as the Virgin Mary. 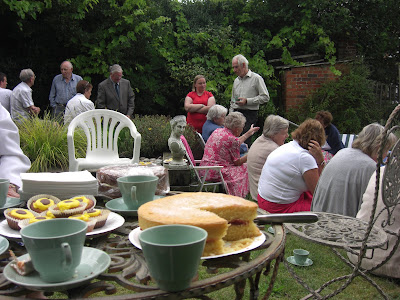 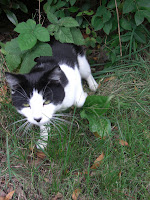 Posted by WeepingCross at 13:25 No comments: Links to this post

Messy Church out and about

We took Messy Church to a Swanvale Halt housing estate this Saturday and had about forty people turn up which I thought was really good. The local community action group lent us their gazebo and tables and our volunteers ran the activities. Religious content was deliberately low but the children made animal pictures, faces and models to add to a 'Noah's Ark' which is now on show in the church. 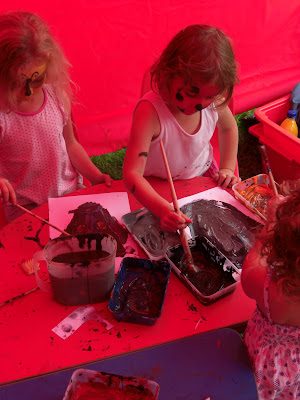 On Friday morning I was surprised to receive this in my email inbox:

"God’s anathema upon the Church of England
General Synod of Your Church resolved that “homosexual orientation in itself is no bar to a faithful Christian life or to full participation in lay and ordained ministry in the Church”.
You have rejected God’s laws and the authority of God the Creator and Supreme Lawgiver.
You no longer call evil evil, a sin a sin, an abomination an abomination. You exchanged the truth for a lie and turned the Church of God into a synagogue of Satan (Rev 2:9).
The fruit of perversion is no blessing but a curse and self-destruction. The apostatical Church of England has ceased to be a blessing for the nation and brings down a curse upon it as well as upon all Europe.
The Byzantine Catholic Patriarchate, by authority of the apostolic and prophetic office before God and before the Mystical Body of Christ, which is the true Church of Christ, hereby declares before all Christians of the world (Mt 18:18): The anti-Church of England is no longer the Church of Christ but spiritual Babylon and the harlot of antichrist (Rev 17:1-6). We hereby call upon every member of this Church to be converted, to repent and to go out from that spiritual Babylon (Isa 52:11). The spirit of antichrist cast the Spirit of God out of this Church. All who want
to be saved must separate from this anti-Church because it leads the deceived souls to eternal damnation in hell. This anti-Church has become a synagogue of Satan (see Rev 3:9; Rev 2:20-24) and preaches a different gospel. “Even if an angel from heaven should preach any other gospel to you, let him be accursed.” (Gal 1:8-9) By reason of apostasy from the Gospel of God, God has cast this curse upon the anti-Church of England.
On behalf of the Byzantine Catholic Patriarchate
+ Elijah
Patriarch"

Apparently everyone has had these, and the Patriarch was thoughtful enough to send a copy to the Queen as well. His Church hasn't been going very long, but in a couple of months, what with calling down God's wrath upon both the Pope and the Archbishop of Canterbury and who knows who else, he's managed to excommunicate the great majority of the world's Christians. At this rate, there'll just be him and the Westboro Baptists left. And I have an idea that there will be some slight matters that divide them, too.
Posted by WeepingCross at 19:21 No comments: Links to this post

Nightmares in the Sky

While on my trip to Worthing last week I visited Badger Books and discovered (as well as a copy of The Mysteries of Udolpho to replace my old one that went astray some years ago) this amusing work: 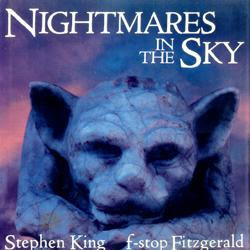 It's a luscious photographic examination of gargoyles - in the broad sense of faces on buildings - to be discovered in New York and environs, and in his introduction horror novelist Stephen King has some interesting thoughts about what these generally horrific creatures represent:

'Gargoyles, with their dreamlike, hideous array of faces, may well serve much the same purpose [as they ever did]: as a way of venting the mental waste material made up of our hidden fears, inadequacies and even our unrealised and mostly unacknowledged aggressions ... they are dark throats, dark gullets, dark drains from which accumulated muck may spew - and thus be dissipated.'

And, mark you, 'even when you don't see them, they are watching you.'
Posted by WeepingCross at 19:10 No comments: Links to this post