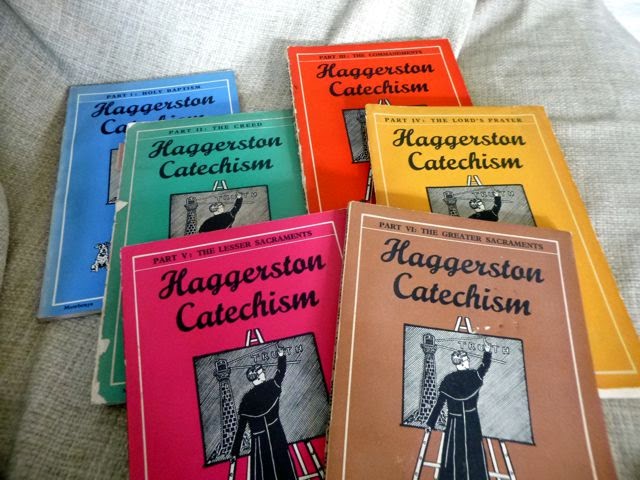 As you may remember I’ve been trying for a couple of years to collect all the volumes of the Haggerston Catechism at a not-completely-eyewatering price, and a couple of weeks ago finally achieved this ambition, as the last volume – no.IV, The Lord’s Prayer – wended its way to me from a bookseller in the United States. It prompted me to read through Fr Trevor Jones’s short biography of Fr Herbert Wilson, the man responsible for the Haggerston Catechism, A Life Simply Offered. It’s a loving picture not only of the priest but also of the culture of the Anglo-Catholic East End which no longer really exists (except, in a shrunken form, around Fr Jones’s own church of St Peter London Docks, and a scattering of other such churches). That culture was destroyed by World War Two, by slum clearance and depopulation, by immigration and by economic devastation, quite apart from the depredations meted out on Church life generally by social change. Anglo-Catholicism is still there, but, notwithstanding the vigour of some churches, in shreds and pieces compared to what it was in Fr Wilson’s day.

Reading the book, you see what a different world it was. The lack of opportunity, the deference, the willingness to defer delight and pleasure in the interest of duty – which was, perhaps, a gloss of virtue painted over the ugly truth of people having no choice in the matter. Perhaps it was the Church itself, by teaching people, as Fr Wilson himself said, to raise their eyes from their sins and look upward to heaven, that gave them the very sort of aspiration which, converted to material and secular forms, undermined their allegiance to Christianity. St Augustine’s Haggerston could rely on its organisations and structures supplying a stream of new Christians for Fr Wilson and his curates to drill and order in sports clubs, servers’ teams, and of course the Catechism Class itself – Scouts, Guides, Boys Brigades. None of that now. I have to beg the uniformed organisations to come anywhere near the church no more than twice a year – not that I do beg, as what’s the point of that? The parish had Mother Kate and the Sisters round the corner from the church, from the order founded by JM Neale 80 years before: a nun or two to do the linens and play the piano for the Catechism Class. That’s what you need, more nuns.

The Haggerston Catechism creaks with age and the weight of its times, the devastation of the odd flying bomb and the occasion spot of casual unthinking anti-Semitism. You couldn’t do it now – 150 sessions taking three years to complete, with never much thought that the children copying Fr Wilson’s words and pictures from the blackboard would stray very far from the little network of grubby streets that formed their East End world. Of course they would – already were – and the most moving aspect of these six little books is Herbert Wilson’s introductions with stories of evacuated children kneeling to pray in country churches where they’ve been sent (‘Which church do you come from?’ asks the vicar; ‘St Orgerstin’s ‘Aggerston’, they reply), or airmen who scribble their old parish priest a few lines while waiting for the next mission: ‘Thanks for everything we learned, Father, I don’t know how I’d manage otherwise’.

No, you can’t do the Catechism now; but you need to do something, I feel more and more, and not just for children but for grown-ups too. The vague motions of the heart and mind don’t coalesce into rocks to hold onto when the nearer waters roll and tempest still is high. You need to learn the stuff that tells you God is real, that Jesus is what God is like; that there is hope. We don’t do enough of that, and rely too much on our own weak resolution and recollection. Fr Wilson knew better.
Posted by WeepingCross at 08:10