As some of my friends lament the demise of nature, my garden seems to be a bit of a haven. I wasn't expecting the 'wild flower patch' to provide much in the way of colour yet, though there have been some dramatic ragwort plants to feed a crop of fat cinnabar moth caterpillars, and some lovely wild poppies, which I've never had before.

My decision not to clip back the masses of oregano on the banks - there is no need, as I wouldn't use that much of it so it can happily flower and run to seed! - has delighted the bees of every variety, honey, bumble, and other, and the butterflies too. Back around Easter I spotted a little Blue and a Cabbage White and then they disappeared, to the extent that I wondered whether they'd ever re-emerge. But since the start of July, the Cabbage Whites and Small Whites have been in evidence again, joined abundantly by Peacocks, Red Admirals, Small Heaths, and the unutterably beautiful Painted Ladies, which I gather fly all the way from Africa and which are on the crest of a ten-year wave this year. The Painted Ladies are jealous of their lovely colouring and won't pose for photographs - as soon as I so much as motion towards my camera they set off again - but these do, which I originally thought were Small Heaths but which in fact I think are Gatekeepers. Such wonder in little space. 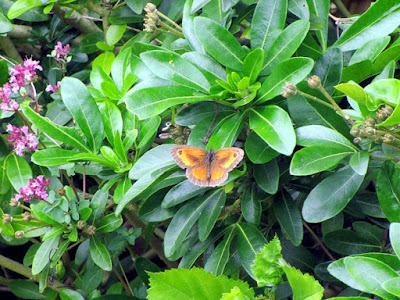 PS. We can add to the roll of butterflies a Comma and a Speckled Wood, both of which I saw this afternoon!
Posted by WeepingCross at 21:38